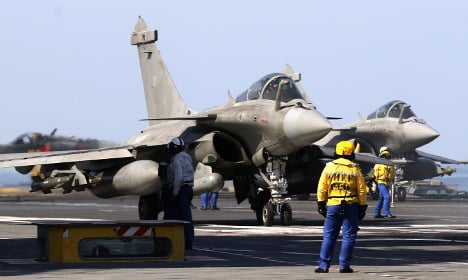 French navy Rafale fighter jets prepare to take off from the aircraft craft carrier Charles de Gaulle operating in the Gulf. Photo: AFP
The same day that Britain said its drones had killed two of its citizens in Syria, President Francois Hollande announced he would send planes into Syria to locate and possibly destroy people believed to be planning attacks on France.
He said the first French flights over Syrian territory would be to collect intelligence, and that this would “allow us to plan airstrikes against Daesh (Islamic State).”
A few hours after he spoke on Monday, Britain’s Prime Minister David Cameron revealed that British drones had recently killed two British Islamic State jihadists in Syria.
This was a lawful “act of self defence” because the jihadists had been plotting “barbaric” attacks on UK soil, Cameron argued, despite widespread scepticism over the legality of the operation.
The next day the British press was awash with stories that British forces had a “kill-list” of about a dozen Britons they wanted to take out in Syria.
France could easily produce the same arguments for killing some of the hundreds of its citizens who have flocked to Syria to join the ranks of the Islamic State (Isis).
Security experts say the terrorist threat posed by European jihadis returning home after fighting in the Middle East is significant.
Mehdi Nemmouche, a 29-year-old French national, who has been charged with carrying out the deadly attack on the Jewish Museum in Brussels,  had spent more than a year in Syria.
“It is certain that there are French among the jihadists (in Syria) and if there are strikes then they too might well be hit,” said Jean-Vincent Brisset, a former fighter pilot and now an analyst at the French Institute for International and Strategic Affairs (IRIS) in Paris.
“A large part of French public opinion would not be too unhappy if a (French jihadist) was not going to come back to France and carry out an attack here,” he said.
“But I don’t think the French have a kill-list as such, even if there a certain number of (French) persons (in Syria) that France would like to see hit,” said Brisset.
Asked about the possibility and legality of French warplanes taking out French citizens, a spokeswoman at French military headquarters said: “For the moment we are at the stage of reconnaissance flights and no strikes have been carried out. So this is not an issue at the moment.”
Jean-Pierre Maulny, a defence expert, said it was likely that French citizens would sooner or later be killed by French planes, but that he did not think French citizens would be singled out in Syria.
“I don’t think they will differentiate between French jihadists and others.”
Maulny pointed out that France does not have drones that it can use in Syria, and would have to rely on the Mirage and Rafale fighter jets it has based in Abu Dhabi and at a Jordanian air force base.
This would make it much more difficult to carry out precision strikes on individuals.
“However if they do have intelligence on French citizens in Syria planning attacks on France, then they would strike,” he said.
But a general policy of targeting French jihadists would be “contradictory,” he said, as the French government is seeking ways of de-radicalising the young people who have ended up in Isis or who are tempted to join, and not to kill them.
by Rory Mulholland