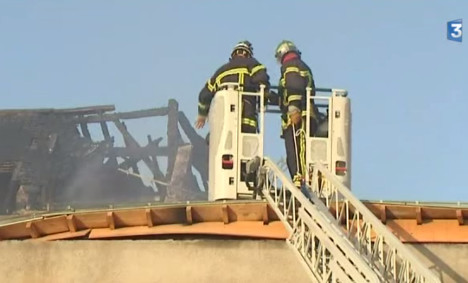 Firefighters seen here tackling the deadly fire in Rosiers-Sur-Loire. Photo: Screengrab France3/YouTube
The youth, now aged 21, reportedly told his mother that he was behind the fire in the village of Rosiers-sur-Loire in western France on the night of January 4, 2012.
However the suspect's lawyer told The Local that his client, who has been charged with murder, now denies being behind the fire and claims he was on drugs when he told his mother.
At the time police investigating the blaze in the building in the centre of the pretty village on the Loire river concluded that it had started accidentally. (The fire in Rosiers-Sur-Loire that killed one person. Photo: Screengrab France3/YouTube)
The case was closed after three expert reports came to the same conclusion that the blaze could not have been started on purpose.
Both the mother and son had been living in Exeter on the south coast of England, The Local has learned.
Firefighters found the body of the one of the residents, a man in his 40s, in one of the burnt-out apartments on the second floor.
A teenager was also reported injured in the blaze.
Ouest-France, the French newspaper which first reported the alleged confession, said that it was the British man who allegedly confessed to his mother, who was the injured teenager in the blaze.
The young man had been living rough on the streets of Exeter in recent years, his lawyer Mickael Poinson, told The Local.
He that at the time of the fire he had travelled from Exeter to France and was living with his English father, a truck driver, in Rosiers-sur-Loire in the apartment where the blaze began.
It was the teen himself who alerted neighbours in the building after the blaze started, the lawyer said. He returned to the UK a short time after the fire.
According to Ouest-France, the youth told his mother that he had used a complicated system to start the fire that involved the battery of his motorbike.
The suspect has not been named in the French press because he was underage at the time of the alleged crime. The man told his mother in May 2014 that he had started the fire. She then went to British police and informed them of her son’s alleged acts, lawyer Poinson said.
The son was living rough in Exeter but had regular meetings with a social worker, and when he turned up for one of these meetings police were waiting to arrest him, a source close to the case said.
It took until August of this year for the extradition process to be completed and for the accused to be transferred to France.
He is now in police custody in the nearby city of Angers. His lawyer said he was in great distress as he was in an overcrowded detention centre and spoke no English. He said he had already harmed himself by cutting his arms and had told judges that he wanted to kill himself.
His request to be released on bail was refused on Wednesday because he could provide no address. His lawyer said that the British consulate in Paris was helping to try and find some sort of accommodation for him at which point a fresh bail application would be made.
by Rory Mulholland