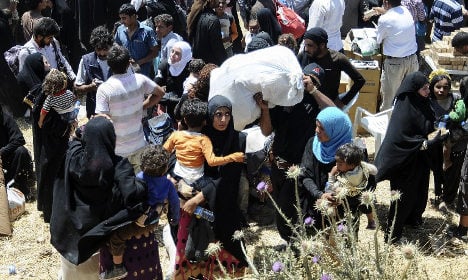 The anti-Muslim stance of some French mayors has angered Muslim leaders. Photo: AFP

Further inflammatory statements about refugees by some mayors in France continued to mar the French response to the refugee crisis on Wednesday as well as infuriate the government and Muslim community leaders.

After two centre-right mayors declared this week they only wanted to accept Christian refugees to keep out potential Islamist terrorists, there was even worse to come on Wednesday from the eastern town of Charvieu-Chavagneux.

A memo, unanimously approved by the council, said the town only wanted to accept Christian refugees because they “wouldn’t proceed to cut off the heads of their bosses”.

The town of Charvieu-Chavagneux, is home to around 8,000 inhabitants and stands just 15km from where Islamic extremist Yassin Salhi decapitated his boss in June, before trying to blow up a factory.

The council's text went even further declaring that “Christian refugees will not put others in danger, they would not attack trains armed with Kalashnikovs and would not gun down journalists in an editorial meeting,” referring to the recent foiled attack by an Islamist gunman on a train, and to the massacre at the offices of the magazine Charlie Hebdo in January.

The text also evoked a “war of civilization” and the “arrival en masse of jihadists on French territory”.

While the words of the council at Charvieu-Chavagneux are the most extreme, other mayors around the country have also expressed reluctance to accept refugees – a process which remains voluntary, so far at least. National Front leader Marine Le Pen vowed that none of the 11 towns run her party would take in any of the 24, 000 refugees the president has agreed to accept over the next two years.

She claimed they simply didn’t have the means, but the suspicion is that anti-Islam sentiment may also lie behind the stance of a party seen by critics as being deeply Islamophobic and racist.

Even ex-President Nicolas Sarkozy has been stoking fears talking of the “risk of the disintegration of French society” due to the influx of refugees and migrants. The man tipped to make a bid for 2017 is presumably not talking about Christian refugees.

Members of the French government have strongly denounced the “dreadful” Christian-only stance, but Muslim leaders fear the damage may already have been done.

The Union of French Mosques strongly denounced the “dangerous” stance of the mayors accusing them of putting the newly arrived refugees at risk.

“These mayors are irresponsible and their words are dangerous especially in the context of this crisis, which is very difficult,” Mohammed Mraizika the secretary general of the Union of French Mosques told The Local on Wednesday.

“Whether refugees are Muslim or from another religion we have a duty to stand together and face up to this human tragedy,” he said.

Mraiziki said the words of the council in Charvieu-Chavagneux, were worse than Islamophobic.

“These people pour oil on the fire. They don’t think about the consequences of their words,” he said.

“Each time there is a statement like this, we notice a steep rise in Islamophobia and racism in France. It’s dangerous,” he said (French fear that jihadists may be among the genuine refugees coming to France. Photo: AFP)

The head of the Union of French Mosques added that France’s general response to the refugee crisis – which will see 24,000 taken in over two years –  is a step “in the right direction”, but warned that countries like France and UK must “take responsibility” for their foreign policies, which he believes have destabilized the whole of the Middle East region.

The refugee crisis comes at a particularly sensitive time for France, which is still living with the after-effects of the deadly January terror attacks in Paris and the threat of further atrocities.

Security remains high and the public remain on edge after several other foiled attacks including a thwarted gun assault on a church near Paris.

A recent poll revealed a majority of French people had the same fear as the mayor of the central town of Roanne Yves Nicolin, who said this week that he feared terrorists could enter France disguised as genuine refugees.

Since terror attacks in January, cracks have opened up in France’s “national unity” and tensions between the country’s five to six million-strong Muslim community and the far-right have grown.

(Islamophobic attacks on Mosques have increased since January. Photo: AFP)

And since the attack on Charlie Hebdo offices the number of Islamophobic incidents have rocketed, forcing the French government to take action.

Professor Hugues Lagrange, a specialist in Islam, from the CNRS think tank told The Local the suspicion towards Islam by many in France can partly explain why opinion polls continue to show a majority of the public are against taking in refugees from Syria and Iraq.

Lagrange says fear over the future of the country’s economy also weighs just as heavily on public opinion.

However, those involved in the efforts to welcome refugees in France insist the controversial views of the mayors of certain towns represent a tiny minority and should not smear the good work of the government and the French people.

“There are around 36,000 mayors in France. We know certain people will be hostile to foreigners, but the most important thing is that France as a whole is committed to a response that is not based on religion,” Christophe Harrison from the refugee support group France Terre d’Asile told The Local.

“We have never had such a large outpouring of generosity and solidarity as we have seen in recent weeks from the French public,” he added.