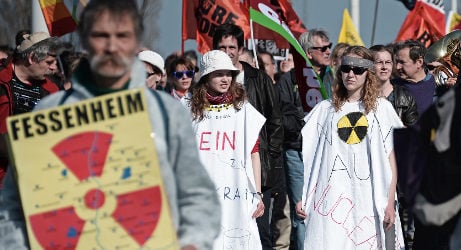 Campaigners march to call for the closure of Fessenheim nuclear plant. Photo: AFP

On a visit to the northeastern city of Strasbourg, Segolene Royal linked the closure of the 37-year-old Fessenheim plant nearby to the opening of a brand new, next-generation nuclear reactor in Flamanville in the northwest, planned for the end of 2018 after four delays.

“When Flamanville opens, Fessenheim will have to close,” she told reporters, sparking a rebuke from her German counterpart Barbara Hendricks who said she was “very disappointed” by comments that appeared to delay the closure by a year.

But a governmental source later backtracked on Royal's statement, saying that the ruling Socialists still planned to close the plant by the end of President Francois Hollande's five-year term — or 2017.

France, the world's most nuclear-dependent country, has been a leading international cheerleader for atomic energy.

The government has nevertheless promised to cut reliance on nuclear energy from more than 75 percent to 50 percent by shutting 24 reactors by 2025, and increase the country's dependence on renewable energy.

Greenpeace France slammed Royal's comments and said closing Fessenheim — which has long sparked safety concerns due to its age — should not be linked to the opening of the €10.5-billion ($11.7 billion) plant in Flamanville.

“This is clearly giving up on the energy transition in France,” said Jean-Francois Julliard, head of Greenpeace in the country.

He said it called into question Hollande's initial promise to close Fessenheim before the end of 2016.

Hendricks, meanwhile, said she had contacted her French counterpart “several times to plead for this old plant to be closed down as soon as possible.”

“I was expecting the reactor to be withdrawn from the network in 2017 as expected,” she added.