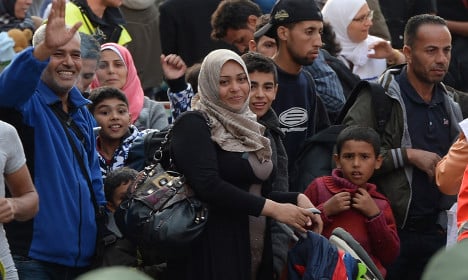 Refugees in Munich, many of whom will be on their way to France over the coming days. Photo: AFP

The group of 200 were due to arrive in the Paris region after travelling by bus from Munich in southern Germany.

They will be lodged in designated welcome centres, before being accepted into towns and villages around the country by authorities who have made it clear they are willing to take in refugees.

The 200 refugees are the first of around 1,000 who are due to arrive over the next three days after the French government made a “gesture of solidarity” to Germany, which has taken in thousands of refugees in recent days.

They have been given refugee status by France and will be the first of 24,000 that the country will accept over the next two years.

Buses that set off from Munich on Tuesday night will drop around 90 refugees at the town of Champagne-sur-Seine, to the south east of Paris, while another 110 will be taken to Cergy, to the north west of the capital.

On Wednesday Prime Minister Manuel Valls will hold a meeting of ministers to discuss how France plans to relocate and lodge thousands of refugees over the coming months.

The arrival of the first Syrian and Iraqi refugees in France has been overshadowed by a row provoked by two mayors who said they only wanted to take in Christian refugees.

The mayor of the central town of Roanne, Yves Nicolin, said on Monday he would only take in Christians in order to be “certain they are not terrorists in disguise”

“You don't sort (refugees) on the basis of religion. The right to asylum is a universal right,” Prime Minister Manuel Valls said Tuesday evening.

France's interior ministry said the decision as to how the asylum-seekers were distributed around the country would be taken by a separate government office, not by individual town halls.

On Tuesday French foreign minister Laurent Fabius said if Europe took all the refugees from the Middle East then it would be a victory for extremist fighters Isis.

“It's very difficult, but if all these refugees come to Europe or elsewhere, then Daesh  has won the game,” Fabius told RTL radio, referring to the Arabic acronym for Isis.

European Commission chief Jean-Claude Juncker on Wednesday urged EU ministers to back plans to relocate 160,000 refugees from swamped border states at a crisis meeting next week.

“It is 160,000 that Europe has to take into their arms, this has to be done in a compulsory way. I call on the (European) Council to agree to take 160,000 at the interior ministers' meeting on September 14,” Juncker said in a speech to the European Parliament.

Juncker was referring to a new emergency relocation scheme of 120,000 refugees from overstretched Italy, Greece and Hungary, combined with a similar scheme for 40,000 refugees in Italy and Greece that he unveiled in May.

He also said the EU should not make religious distinctions when dealing with refugees.