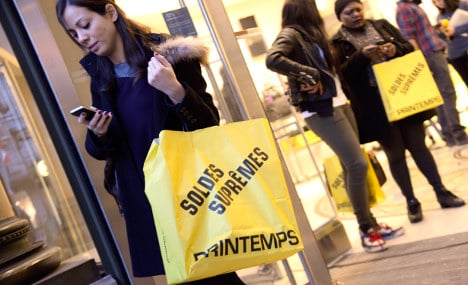 Mayor Anne Hidalgo wants to prevent Paris turning into a consumers' paradise? Photo: AFP
The left-wing mayor of Paris Anne Hidalgo and trade unions are fighting a rearguard action to block the Sunday shopping plans bulldozed through parliament by the economy minister to help the French capital rival London.
Hidalgo has been fiercely against relaxing Sunday trading laws, arguing that closed stores are just one of the many quirks that gives Paris its distinctive identity.
She was furious when Economy Minister Emmanuel Macron pushed his reforms through parliament without letting MPs debate the plan to let stores in tourist areas of Paris open on every Sunday of the year and until midnight during the week.
Hidalgo has written a vitriolic letter to Macron criticized his “fantasy of turning Paris into a city dedicated to consumerism” and “ignorance of the commercial fabric of Paris that pulls in tourists from around the world.”
In the published letter, she criticizes the commercial “tourist zones” around that are due to be set up as part of the reform and points out they will kill off some of the 15,000 small independent stores that are already open on Sundays.
“They will destroy the ecosystem that is an international emblem of our city,” Hidalgo writes.
Previously shops could only open on a handful of Sundays in the year. The new opening hours are due to begin imminently.
The reform is motivated by the desire by French authorities to take advantage of Paris being the most visited city in the world and to get the tourists spending more of their euros in the capital's stores.
That then would have a positive impact on jobs, Macron argues.
But Hidalgo now plans to dispute the constitutionality of aspects of Macron’s reforms with an appeal to France’s Constitutional Council which claims the minister did not respect procedures when he pushed through the legislation.
The new Sunday opening plans are also coming under fire from trade unions, which have opposed any extension of weekend shopping from the start.
The major department stores in Paris, such as Printemps and Galeries Lafayette on Boulevard Haussmann, need the green light from unions if they want to open their doors every Sunday, Europe 1 radio reported on Tuesday.
But the unions have the right to simply say no and can thus block the plans.
To get them to agree, the stores may have to offer concessions such as double pay for those agreeing to work on Sunday, and incentives like allowances for childcare.
But there is no guarantee that the unions will come on board, so Sunday shopping may not be happening any time soon, Europe 1 said.