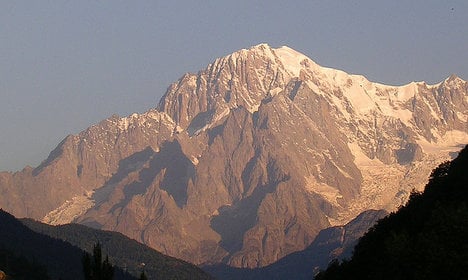 France and Italy are disputing the border on Mount Blanc. Photo: Andreas 68n

On Friday, guides dispatched by the mayor of Chamonix, Eric Fournier, clipped the gate to the Gigante glacier shut, Il Fatto Quotidiano reported.

The glacier lies just under Rifugio Torino, an alpine hut near the highest cable car station on the Italian side of the mountain.

The small gate permits access to the glacier, while signs warn tourists without the necessary equipment or experience not to venture onto it.

Fournier justified the move by saying that the glacier was in French territory and had been closed off for security reasons.

But 20km across the border in the Italian town of Courmayeur, the decision has provoked outrage.

“That rifugio is in Italy and the French have no rights up there,” the mayor of Courmayeur, Fabrizia Derriard, told Il Fatto Quotidiano.

“They have removed hazard warnings that we have placed there following a massive influx of tourists in recent months and the closure creates an added danger for alpinists too, who now have to climb over a hurdle to access the glacier.”

Italy bases its borders on a Nato mapping convention dating back to 1860, which places the Franco-Italian border on the watershed 300 meters above the Refugio Torino, in the middle of the glacier. But the French have other ideas.

This is just the latest controversy in a long history of border disputes on Mount Blanc. Earlier this summer the French sparked controversy by using bulldozers to shift a border marker 150 meters into Italian territory.

But this time the French's actions have been met with hostility by the Italians, who know the 4810 meter-high mountain as 'Monte Bianco'.

Many Italians would like to see official maps state that the summit of Europe's highest mountain is shared between the two countries.

Derriard has promised legal consequences and the Italian authorities have already compiled a report on the incident.

The Italian Institute of Military Geography will be conducting new surveys in the coming days, although the border dispute on the roof of Europe looks set to rumble on.