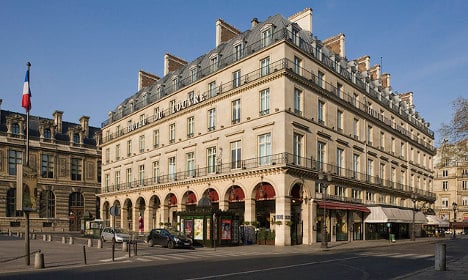 The Hotel du Louvre in Paris where a Saudi natonal had his €180k watch snatched. Photo: AFP
The grand-nephew of the Saudi king was making a call on the street outside the Hotel du Louvre Paris near the famous Gallery, when thieves snatched the watch from him.
The three-man gang was loitering near the hotel looking for rich guests to prey upon when they spotted Prince Mohammad Bin Adulaziz Al Saud, a grand-nephew of the Saudi king, walking up and down on the footpath as he made a call around midnight on Saturday, Le Parisien reported.
They wrestled him to the ground, grabbed his timepiece made by the luxury Swiss watch brand Audemars Piguet, and made off into the night.
Police have so far made no arrests in the case but media reports said they are trying to find fingerprints of the thieves on an umbrella the gang left at the scene as they escaped,
The prince is not the first wealthy Saudi to fall victim to thieves in Paris.
In August last year thieves armed with Kalashnikovs attacked the motorcade of another Saudi prince in Paris. The robbers stole around €250,000 in cash and some “sensitive” documents.
Last October a man working for the Saudi embassy in Paris had €15,000 in cash stolen while dining out in a posh restaurant.
The same month a niece of the Saudi king had a total of €25,000 stolen after she left two bags in her car in French capital.
Url copied to clipboard!