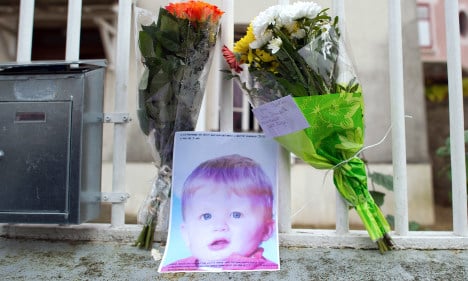 A file picture taken on November 28, 2011 shows flowers and a picture of three-year-old Bastien at the entrance of the child's parents' house in Germigny-l'Eveque. Photo: AFP

The father, Christophe Champenois, 37, denied any memory of the crime in which he allegedly stuffed his son Bastien into the machine and switched it on as punishment for his bad behaviour at school.

“At the moment I don't remember anything,” Champenois told the court, his alleged amnesia the latest in a long line of explanations for what unfolded in the home of the troubled family on November 25, 2011.

It was Champenois himself who called emergency services in the town of Germigny-l'Eveque, east of Paris, saying he had a “small problem” as his son had fallen down the stairs.

He added that he had given him a bath to refresh him and that the toddler must have drowned because he had water coming out of his nostrils.

However the victim's older sister, then five, told the doctor: “Daddy put Bastien in the washing machine because he was naughty at school.”

She maintained this version throughout the investigation, and the child's mother Charlene Cotte, 29, has said she saw Champenois put Bastien in the washing machine and turn it on.

Cotte told investigators she was doing a puzzle with her daughter and Champenois was surfing on the internet while their son screamed inside the tumbling machine.

She said that when her ex-husband removed Bastien from the washing machine and noticed he was no longer breathing he said: “At least he won't bother us anymore.”

However, in an interview with Le Parisien published Tuesday, Cotte said she had tried to save her son and that Champenois had pushed her away from the washing machine.

A neighbour who came to the apartment to help described Bastien as “frozen, completely naked. He was all white, limp, practically like a toy.”

Cotte was initially charged with failing to prevent a crime, but this was changed to “aiding and abetting murder and violence.”

She again denied any complicity in the crime in court on Tuesday.

Fell through 'all the cracks'

Her lawyer Gerard Zbili described her as a “broken woman who lost the child that she loved” but who was unable to protect him out of fear of her husband.

Several child protection agencies are appearing in a civil suit in the case, which has revealed a deeply troubled family known to social services.

It has emerged that the golden-haired Bastien was not wanted by his father, who dealt out harsh punishments for his increasingly agitated behaviour at home and at school, such as locking him in a cupboard.

The failure of social workers will also be examined in the trial, as three reports of a “child in danger” and nine of “worrying information” had been filed before the murder.

“This is not an isolated act… it is not a fit of rage or madness, it is the final act of violence against a child who was always mistreated,” said Isabelle Steyer, lawyer for a child protection group, who said Bastien has “fallen through all the cracks.”