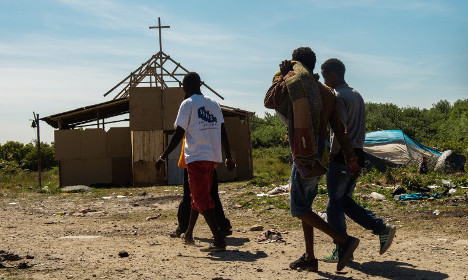 Refugees stand next to a makeshift church in the "New Jungle" in Calais. Photo: AFP

Details will soon be given over how exactly France plans to accommodate the 24,000 refugees it has promised to take in over the next years.

But there could be trouble ahead if the statement of the mayor of Roanne, a town in the Loire Valley, are anything to go by.

Yves Nicolin, (see photo below) who is also an MP from the centre right Républicains party, went on the record on Monday, saying he was ready to accept refugees in his town.

However he added one condition: “that the refugees are Christians”.

Nicolin’s justification for taking up a clearly inflammatory stance in a country with Europe’s biggest Muslim population was that he feared that some of the Syrian or Iraqi refugees that could end up in his town could be “disguised terrorists”.

“What I hope is that we can be absolutely certain that they are not masked terrorists,” he told France Bleu radio.

“That’s the reason for asking for Christian refugees, which would provide a sufficient guarantee.”

On Tuesday Nicolin took to the airwaves again, but far from back tracking amid the storm he had stirred up, he stuck to his guns, insisting that it would not represent “any kind of religious discrimination.”

“I simply said we must determine the real intentions of the migrants,” he told France Bleu radio. ” I have a duty, I am there to protect my citizens.” “If France decides to host a number of families on its territory and it decides to integrate them, that is to say give them papers, then the town of Roanne could play that role and accommodate around a dozen families,” said Nicolin.

“But on the condition that they are Christian refugees because Christians are have been persecuted in Syria by Isis,” he said.

Asked about the persecution of other minorities such as the Kurds, the Yezidi or Shia Muslims Nicolin called on “all feasible precautions” to be taken.

“It will take longer to check that these people who are indeed persecuted are not economic refugees and that are leaving their country in an emergency because Isis want to clear  them out of the territory,” he added. Although Nicolin’s statement was controversial enough to earn him headlines across the French press this week, a recent poll suggests his fears put him in the majority.

Perhaps those fears are understandable given the Paris terror attacks at the start of the year and numerous thwarted terror plots in the country since then.

There may be many more members of the French public who would feel more comfortable only welcoming Christian refugees, rather than Muslim ones into their neighbourhoods.

And it's not just in France that concerns have been raised. On Monday Spain's interior minister called for tighter controls to prevent members of the armed jihadist group Isis from infiltrating the “avalanche” of refugees arriving in Europe from Syria.

“The vast majority are refugees fleeing war, terror, but we can't forget that Isis is over there and these barbarians have shown that they are capable of carrying out their threats,” Interior Minister Jorge Fernandez Diaz told daily ABC.

However clearly not all mayors in France were taking up Nicolin’s position.

Gaël Perdriau, the mayor of the central eastern city of Saint-Etienne said he had decided to host refugees, “according to our capabilities, those who are trying to escape war and death.”

“I call on all politicians, both local and national to grasp this situation without fear, which requires us to make one simple decision: We will welcome,” said the mayor in a statement.

More details about how, where and when France will accommodate the thousands of refugees are likely to be given over the coming days and following the Interior Minister’s meeting with the country’s mayors on Saturday.