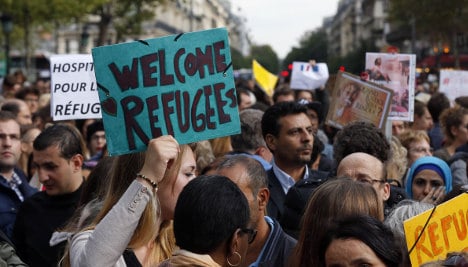 Around 8,000 pro-refugee protesters demonstrate in Paris at the weekend. Photo: AFP

While refugees were applauded upon arrival at Munich rail station at the weekend it was business as usual on the French–Italian border.

Although Germany has basically scrapped EU rules and opened its doors to refugees travelling through Europe, France continues to send them back to Italy.

The French president vowed on Monday to take in thousands of refugees but on the Italian border police said they are sending up to 200 refugees and migrants back to Italy each day, in line with the Dublin accords that state refugees must seek asylum in the EU country of arrival.

“This changes nothing,” said Philippe Castanet from the town of Grasse in France's southern region of Provence, referring to Hollande’s call for binding refugee quotas. He vowed to turn back any foreigner who wasn’t holding the necessary papers.

It wasn’t the only contrast between France and Germany’s stance towards the ever-growing refugee crisis in Europe.

On Monday, Germany announced that extra housing would be built to accommodate refugees. There would also be language training and extra police, paid for out of an extra €6 billion that will be spent on dealing with the crisis.

Back in France a new tented camp will be built for migrants in Calais — but paid for with EU money.

Merkel has been unafraid to tell it how it is when it comes to a subject the governments of Britain and France are often desperate to avoid.

On Monday, she said that the “breathtaking” influx of refugees would “change” Germany in the years to come. It is hard to imagine Hollande daring to say those words, knowing they would be seized on by his right-wing opponents.

While opinion polls in Germany suggest people are largely in favour of accepting refugees, a poll in France published at the weekend revealed a majority of the public were against adopting Germany’s open borders policy — despite what the presence of 10,000 people at a pro-refugee demonstration in Paris on Saturday might suggest.

And it's not just people in the two neighbouring countries who differ in their stance towards refugees either. So too do some of the local authorities tasked with welcoming those fleeing war-torn countries.

While the mayor of Munich said his only concern was providing a safe haven for refugees, a mayor in France spoke out on Monday claiming he was only willing to accept Christian asylum seekers, out of fear that Islamist terrorists might sneak through disguised as Muslim refugees.

Hollande is keen to be seen standing side by side with Merkel, who has won plaudits for opening her arms to refugees .

“We cannot leave Germany alone to take on this responsibility,” Hollande said on Monday.

But despite his vow, France is unlikely to show the same kind of sympathy towards refugees and migrants as Germany has, for a number of reasons explains Jerôme Fourquet, a political analyst and pollster from Ifop .

Essentially the two countries face contrasting political and economic challenges, as well as levels of fears of Islamist terror attacks, that can account for the diverging stances towards refugees. “One country is prospering and healthy, and the other is in the middle of an economic crisis,” Fourquet tells The Local.

“In Germany unemployment stands at 5 percent and there are whole sectors where they are in need of workers. But in France we have ten percent unemployment and it's not falling.”

Fourquet also points out the difference in public finances between the two countries with spending balanced in Germany, unlike in France where the deficit is significant and the politicians talk of the need to balance books.

“German society is conscious of the fact that they need to find young foreigners to come and keep the economic machine working and pay for the pensions of older generation, Fourquet says.

“In Germany you have different company bosses who say they are ready to take on apprentices and trainees from the migrant population because we will need to have them in the coming years. You don’t have this kind of political discourse in France,” he adds.

“Here the birth-rate is not exactly flourishing but it is much more dynamic than Germany’s and more capable of renewing the generations.

“Yet France is struggling to find work for its young people, with youth unemployment in the country standing at around 25 percent.

“For a few years now in France, economic growth has not been enough to absorb young French people into the workforce. We are not creating enough jobs to absorb this demographic growth,” he said. There are also significant differences between the two countries' recent histories that have played a roll.

“In Germany they have a past that weighs heavy on the country, regarding national identity and the rejection of foreigners, Fourquet says.

“There is not this taboo in France.”

Germany also has a much more recent history of accepting large numbers of refugees and economic migrants, who fled the old Soviet bloc or moved on mass from east to west Germany after reunification.

And while France has its own tradition of welcoming thousands of refugees, notably the Vietnamese boat people and Algerians fleeing war, this has not been the case in recent years.

France is home to Europe's biggest Muslim population and the question of the role of Islam in French society has never been more important since January's Islamist terror attacks shocked the nation.

Although Germany has seen its own anti-Islam marches in Dresden, it has not experienced the terror that France did during three days in January.

“These refugees come from Islamic country at war, a fact which weighs on public opinion in France,” Fourquet says.

A poll published at the weekend revealed that 56 percent of French people interviewed believed that terrorists may be among the thousands of refugees heading into Europe. The role of the far right

It’s this kind of fear that Marine Le Pen’s far-right Front National has helped to stoke in recent months.

Her party continues to ride the crest of a wave, with yet another poll on Monday suggesting she would make it to a second round vote in the 2017 presidential elections, knocking Hollande out of the running.

Fourquet says it’s not a coincidence that a country like Germany, where there is no strong far-right party, has been more welcoming to refugees.

How will things change?

But as reaction to the publication of the photo of the drowned Syrian boy shows, public opinion, and indeed government policy, towards the refugee crisis can change swiftly.

“Certainly the polls show that French people are less reluctant to accept refugees than before the summer, but even then we still have around 50 percent of people opposed to welcoming refugees, despite all the calls to take in more and the increased emotion,” Fourquet says.

But things could also change in Germany.

“If next year another 800,000 asylum seekers come into Germany, we cannot be sure there will be the same reaction,” the pollster warns.