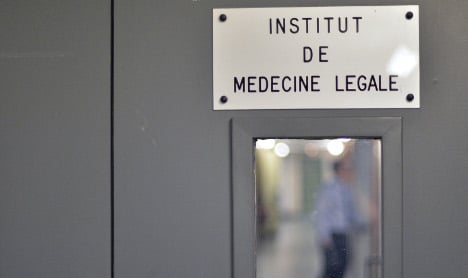 The entrance of the forensic medicine institute in Strasbourg, eastern France, where remains belonging to victims of Nazi anatomy professor August Hirt have been found. Photo: AFP

The remains of Jewish victims who were killed for the skeleton collection of Nazi anatomy professor August Hirt were buried in northeastern France on Sunday, according to an AFP journalist.

Discovered at a forensic medical institute in eastern France in July, the remains were interred during a ceremony at a cemetery in Strasbourg, attended by prominent local leaders as well as members of the Jewish community and the
city's chief rabbi.

In 1943, 86 Jews were sent to the gas chambers and their bodies brought to Strasbourg, which was then under Nazi occupation, where Hirt was assembling a macabre collection of corpses.

The bodies, some intact, others dismembered or burned, were found in November 1944 after the liberation of Strasbourg, in bins filled with distilled alcohol. Following an autopsy, they were buried in a common grave in 1946.

But two months ago, historian Raphael Toledano found other undiscovered remains at a forensic medicine institute in the city.

Working with the institute's director, Jean-Sebastien Raul, Toledano managed to identify several of the body parts, including “a jar containing skin fragments of a gas chamber victim”.

Test-tubes containing the intestine and stomach of one of the victims was also found.

Hirt committed suicide in July 1945, before the Nuremberg trials.