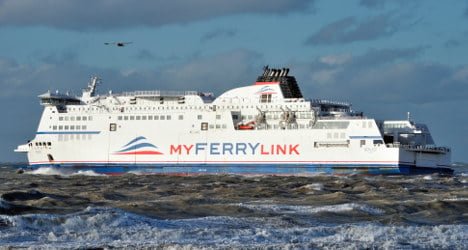 One of the My Ferry Link boats that was trashed by striking French ship workers. Photo: AFP

Striking French ferry workers who caused travel chaos in Calais trashed one of the two ships they occupied for two months, drank its bars dry, slashed hundreds of seats with box-cutters, and stole televisions and fridges, the ships' owner, Eurotunnel, has said.

The damage was revealed by experts sent in last week to inspect the MyFerryLink boats as Eurotunnel prepares to hand them over to DFDS ferry operator after a deal reached  to resolve the industrial dispute.

The seats are believed to cost between €300 and €500 each, and the total amount of damage done to the ships could be more than two million euros.

“They trashed the bars, smashed the cash registers and helped themselves to fridges, televisions and sound equipment,” said Mr Keefe.

It will cost several hundred thousand euros to replace or repair the emergency evacuation chutes and the lifeboats of both the Rodin and the Berlioz ferries that were deployed by the workers during the dispute.

Around 25 workers from the Syndicat Maritime Nord (SMN) union occupied each of the two ships moored in Calais docks since early July in a protest over the potential loss of 600 jobs caused by the sale of MyFerryLink to Denmark's DFDS.

The strikers also blocked roads leading to the port, burning tyres on motorways, and brought trains using the cross-Channel tunnel to a halt when they invaded the nearby Eurotunnel terminal.

No-one was immediately available at the SMN union to comment on the accusations by Eurotunnel when contacted by The Local. But its leader, Eric Vercoutre, told local media late last week that he disapproved of the “unfortunate” slashing of the seats on the Rodin.

He also said he was proud of the “admirable combat” of the ferry workers.

Under a deal struck last Monday to resolve the dispute, 402 French ferry workers workers will be kept on.