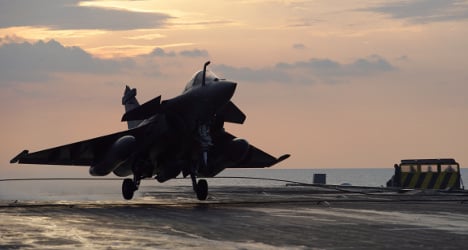 Hollande said he has given the green light for French warplanes to fly reconnaissance missions over Syria to prepare for air strikes against Islamic State (Isis) targets there.
France was the first country to join the US-led coalition carrying out air strikes on Isis in Iraq and has supplied weapons to what it considers moderate rebels fighting Syrian President Bashar al-Assad’s regime.
But it had so far ruled out bombing the terror group’s bases in Syria out of fear that this might benefit the Assad regime.
Hollande signalled at his press conference that this position had now changed.
“We have proof that attacks have been planned from Syria against several countries, notably France,” he said.
“I have asked the defence ministry that from tomorrow surveillance flights can be launched over Syria, allowing us to plan airstrikes against Daesh (Isis).”
He also confirmed that France would not send ground troops into the country.
“It would be inconsequential and unrealistic to send French troops into Syria on the ground,” he said.
“Unrealistic because we would be the only ones. Insignificant because it would be transformed into an occupation force, so we won't do it.”
He said that finding a political transition that sidelined Assad was “essential”.