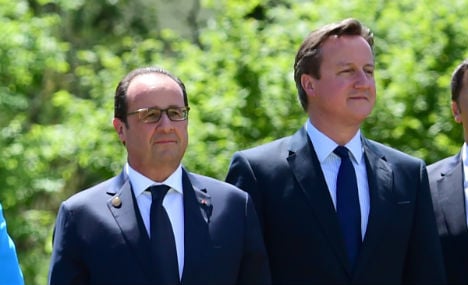 François Hollande and David Cameron are changing tack on Syria, but many analysts suggest its too little, too late. Photo: AFP

France's president François Hollande and the UK's Prime Minister David Cameron spoke by telephone on Monday evening to discuss plans to “reinforce action” in Syria and “coordinate the fight against Isis.”

While the leaders appear committed to launching air strikes against jihadists, who are planning attacks in Britain and France, many analysts believe air bombardments will be ineffective.

France said on Monday it had ordered preparations to begin for air strikes on the Islamic State in Syria while British Prime Minister David Cameron said there was a “strong case” for the UK carrying out air strikes in Syria.

Cameron confirmed that Britain had carried out a first drone strike in Syria in August, killing three jihadists, two of them from Britain.

Britain is already carrying out airstrikes on IS targets in Iraq, but Cameron said he wanted Britain to able to extend its anti-Isis bombing campaign to Syria.

In Paris, Hollande said he had ordered surveillance flights to begin over Syria to lay the ground for air strikes on Isis targets.

“I have asked the defence ministry that from tomorrow surveillance flights can be launched over Syria, allowing us to plan airstrikes against Daesh (the Islamic State group),” Hollande told a press conference.

France has been targeted by a series of jihadist attacks this year, most recently when a heavily armed suspected extremist tried to attack a train on French soil only to be overpowered by passengers.

Coupled with the migrant crisis, which is partly fuelled by refugees fleeing the chaos in Syria, the political pressure has been building on Hollande to take action.

Hollande however ruled out sending French ground forces into Syria, saying it would be “unrealistic.”

“It's for regional forces to take their responsibilities. France, however, will work to find political solutions,” he said.

'Late in the game'

France, like Britain, is currently only participating in missions against Isis in Iraq.

Despite the united front analysts lined up on Monday to criticize Hollande and Cameron's strategy shift, suggesting it was too late and too little.

“It's above all else a domestic political gesture, with in the background the message 'look, we're doing something',” retired French general Jean-Claude Allard, director of research at the Institute of International and Strategic Relations (IRIS), said.

Myriam Benraad, of the Centre of International Research (CERI) in Paris, said: “It's a direct response to this disaster, but it comes a little late, and airstrikes are not enough to solve this problem.”

Jean-François Daguzan, co-director of the Foundation for Strategic Research in France told L'Express magazine previously that “only troops on the ground will succeed in weakening Isis in the long term.”

His view was echoed by Joseph Henrotin, a specialist on questions of Defense for CAPRI (Centre for Analysis and Prevention of International Risk).

“To fight against a hitech-guerilla group like Isis requires a lot more than using airplanes, but that's the only thing the French armed forces can do,” he said.

He says cutting the head of the monster by taking out the leaders of Isis in targeted bombing campaigns will resolve little.

“If they cannot reconstruct solid institutions in Syria, the death of the jihadist organisation will only prepare the way for its successor, just as the weakening of Al Qaeda lead to the emergence of Isis,” he said.

François Heisbourg, president of the International Institute of Strategic Studies (IISS) said while air strikes were easy to order and carry out, France would be better off piling its resources into its intelligence services to tackle the “tourist jihadis” in Syria.

“It would be less spectacular but probably more effective,” Heisbourg wrote in Liberation newspaper.

Cameron cited the risk of terror attacks in saying he believed there was “a strong case” for Britain taking part in airstrikes in Syria.

“I believe that case only grows stronger with the growing number of terrorist plots,” he told parliament, adding that six plots against Britain had been disrupted over the past 12 months.

The defeat that Cameron suffered on taking military action in Syria in 2013 was one of the most damaging foreign policy blows to his previous coalition government.

The prime minister needs opposition support to win parliamentary approval for the air strikes, because of his slim parliamentary majority and because some of his own lawmakers are against the move.