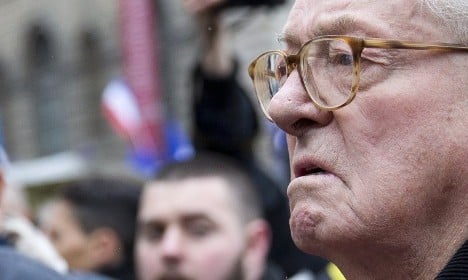 Jean-Marie Le Pen. Photo: AFP
The 87-year-old made his remarks in Marseille where the FN is holding a party conference through Sunday with its president Marine Le Pen wanting to focus on regional elections set for December.
But a few kilometres away in an upmarket restaurant, her father was meeting over lunch with around 300 supporters.
Jean-Marie Le Pen expressed his wish to start a movement dubbed the “Blue White and Red Rally”, aiming to unite those without FN party membership and those still loyal to him.
“I propose that we join together, you will not be orphans, in the Blue, White and Red Rally… to take action in the same way as the National Front, without belonging to it,” he said.
“The Front National and Marine Le Pen will not be able to refuse our move,” Le Pen declared.
But that's not exactly the way his daughter saw it.
“Jean-Marie Le Pen can create all the associations he wants  — he's been promising one for many months — (but) there are no associations within the FN,” said Marine Le Pen.
And some of father's supporters Saturday, who loudly applauded his speech, afterwards expressed doubts about a new group.
“For me, Jean-Marie, I would follow him to the end. But if this is intended to work with Marine I won't go along,” said Laurence Trichet from Nice, who recently left the FN in a show of support for the party's patriarch.
Le Pen was stripped of his FN membership by the party's executive committee last month following a damaging five-month family feud with his daughter over a string of inflammatory comments.
He dismissed the hearing as a “mockery” and an “ambush” and blamed Marine, who took over from him as leader in 2011, of pulling the strings from afar.
“It's dirty to kill your own daddy, so she didn't kill daddy directly, she did it through her henchman,” Le Pen told French radio at the time.
The elder Le Pen has been a persistent problem for his daughter as shetries to smooth over the overt racism and xenophobia of the party's past.
The final straw came in April when he rehashed familiar comments about gas chambers being a “detail” of history and said France should get along with Russia to save the “white world”.
Marine Le Pen then openly split with her father, saying he was committing “political suicide”.
But the former Foreign Legionnaire has refused to go quietly, vowing to “reconquer” the party he founded in 1972.