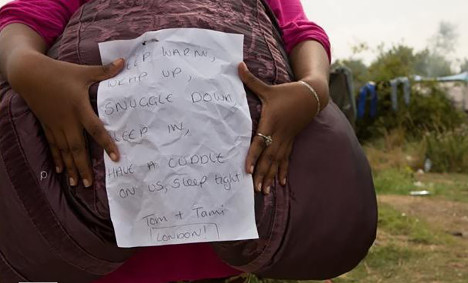 A refugee in the New Jungle camp in Calais clutches a sleeping bag and a message from those who donated it. Photo: AFP

The plight of the estimated 3,000 refugees camped out on wasteland near Calais in makeshift tents and huts is spurring the British public into action.

While the response from the UK authorities towards the crisis in Calais has chiefly been to step up security to keep the migrants out, the public’s response has been to send tens of thousands of pounds of aid and supplies across the Channel.

New charities have been set up too, and there’s numerous accounts of people who are filling up their car boots with supplies and driving across the Channel to give it out.

One typical message reads: “I'm traveling to Folkestone and jumping on the channel tunnel into Calais on Wednesday 9th September with a van full of aid. Please can you advise of a drop of location or locations.”

One of the new charitable organisations is Calaid, which was born out of a simple Facebook post written by Jaz O’Hara, who visited the New Jungle camp in Calais earlier this summer to make a film for The Worldwide Tribe community.

Her account of the desperate living conditions and an appeal for help went viral, being shared thousands of times. She was then inundated with supplies and donations.

“We’ve raised over €130,000 which is a crazy amount of money. We’ve just had so much support with people offering both financial and physical donations,” she told The Local. (Jaz O'Hara with a refugee in the New Jungle camp in Calais. Photo: AFP)

The group has been forced to put a notice on their website telling people that for the moment they have run out of storage space for donations.

But they are in the process of setting up a network so people across the country can get donations to Calais.

As well as Calaid there are other groups that have been set up, such as Calais Action, Kent for Calais and Calais People to People Solidarity action from UK, to give the British people an opportunity to donate funds and supplies to those refugees from Sudan, Eritrea, Syria and Afghanistan and other countries, who are desperate to leave Calais for the UK. The Justgiving charity donation webpage lists numerous groups raising money for refugees in Calais including the Coach and Horses pub in Soho, that has far surpassed its target of raising €5,000.

O’Hara puts the “overwhelming” response down to a sentiment among the British public that their government is not doing enough.

“I think people are angry that the government is turning its back on a desperate situation in Calais. People are now taking action on their own.

“At first there was a lot of negative news in the UK about “migrants”, but people are starting to realise no one risks their lives to live on benefits in the UK. It took the photo of a three-year-old drowned Syrian boy to change things.”

O’Hara, who works in fashion, accepts that she and her two brothers, who are also involved, are not best placed to know how to spend the money, so they work with French charities on the ground to decide where the resources are needed most.

“I don’t think about policies or have any answers, only about providing aid. Every time I go to Calais I am shocked and emotional. It’s overwhelming. These people still have hope despite their desperate situation.

“It needs to change. It’s crazy that people are living in these conditions.” The action from the British public has been noticed and welcomed by the French charities working on the ground in Calais.

“Since the beginning of summer we have seen an increase in the number of people coming from Britain to distribute equipment and essentials to the migrants,” Jean-François Corty from Medecins du Monde in Calais told The Local.

“It’s a great thing and shows a real mobilisation. Like many French people they are totally disappointed by the lack of response from their governments, because they can see that it is Germany's Angela Merkel who is leading on this issue.

“They know this is a problem that concerns the UK, because most of the refugees in Calais want to get to Britain.”

Corty says there needs to be organisation around the delivery of aid and has advised Brits heading over the Channel with a carload of supplies to coordinate with local charities like Secours Catholiques.

Corty criticised France’s new plan to build a new camp for only 1,500 migrants when around 3,000 are living in the New Jungle.

“It’s unacceptable. There people are living in danger and we need to continue to mobilise both the French and the English governments to provide protection for these people,” he said.