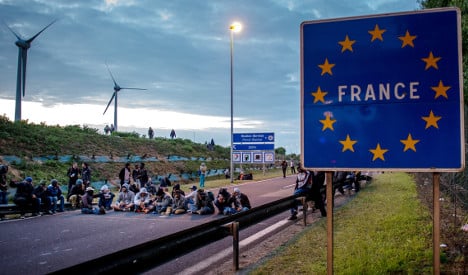 Should France stick to its traditions and accept more refugees? Photo: AFP

A vow was written into France’s constitution back in 1793 that promised to provide “asylum to foreigners banished from their countries in the cause of liberty”.

Up until recent years consecutive French governments stuck to that promise and the country topped the list of destinations for asylum-seekers in Europe.

For a decade up to 1985, France welcomed 110,000 “boat people” escaping communist regimes in Cambodia and Vietnam. It took some 15,000 Chileans after the 1973 coup by General Augusto Pinochet.

Before that the country also welcomed hundreds of thousands of Algerians fleeing war in the 1960s.

But in recent years things have changed and France has proved one of the most reluctant of Europe's biggest nations to accept those seeking asylum, with Germany and Sweden taking in far more. (This photo of the drowned Syrian boy has left Europe in shock. Photo: AFP)

Since 2011 only 7,000 Syrians have been granted refugee status in France, out of four million people who have fled the country, although in the UK that number is an even lower 5,000, and many of those were already in the country.

Matthieu Tardis from the NGO France Terre D’Asile told The Local previously that France was failing to meet its legal obligations to Syrian refugees, and that there was a “moral crisis” in France regarding refugees and immigration.

“Quite simply, France is not doing enough to help and accommodate Syrian refugees fleeing the conflict in their country,” said Tardis.

Pierre Henry, Director of Terre d’Asile added: “Welcoming refugees is in our DNA.”

“But today, we are in the middle ranks of Europeans on the issue of asylum, we are no longer a powerful voice on the subject,” Henry told AFP.

The apparent shift has come as immigration has developed into a hot political issue in France, helped by the rise of the far right National Front party, whose leader Marine Le Pen has long called for France to close its borders. (A tent in the Calais camp of The Jungle 2. Photo: AFP)

Le Pen says France is suffering under a “migratory submersion” and even opposition leader and former president Nicolas Sarkozy recently compared the influx of migrants to “a burst water-pipe”.

Their views appear in line with those of many of a French public who are deeply worried by the state of the country’s economy.

A new opinion poll released on Wednesday revealed 56 percent of the French public are against authorities accepting more refugees.

But some Parisians who live near makeshift migrant camps say France must do more.

“Our country's motto is 'equality, solidarity, and fraternity'. It makes sense that France should help the people that it needs,” Imen, a 25-year-old Parisien living near La Chapelle told The Local on Thursday.

“People shouldn’t forget that it was migrants from countries like Morocco and Tunisia who helped construct many of the local roads and buildings.” (Town Hall officials clean a park that is home to around 80 migrants. Photo: The Local)

Jean-Philippe, a 34-year-old 3D animator, added: “I believe that anyone should be able to live anywhere they want. These guys are here because of problems back in their home country.”

Nevertheless the negative opinion of the majority of the French public contrasts starkly with Germany where a recent poll revealed 69 percent were in favour of the country taking in refugees – a contrast explained by differing economic fortunes of the two states.

“The French see France as a country in economic difficulty, with a high level of unemployment, with public resources hard to come by and an immigrant population that is already high,” explained Jérôme Fourquet from Ifop polling agency.

France certainly lacks the resources to cope with newcomers, with only 30,000 hostel beds for asylum-seekers.

But as well as a lack of will and resources in France others argue that Sweden and Germany attract more migrants for different reasons other than the warmth of their welcome.

The majority of refugees are currently Syrians, Iraqis, Eritreans and Somalis — groups that have stronger ties to Britain, Germany and Sweden. France's relative lack of English speakers is also believed to be a turn-off.

But although public opinion may be against taking in more refugees and asylum seekers, France’s Socialist government now appears ready to act.

On Thursday President François Hollande called for a crisis meeting of his top ministers on the issue of migrants. Also, Interior Minister Bernard Cazeneuve insisted this week that they serious about the issue. (The Calais camp of The Jungle 2. Photo: AFP)

On Saturday French Prime Minister Manuel Valls said migrants and refugees who “are fleeing war, persecution, torture, oppression, must be welcomed,” adding that the rule should be to treat them with “dignity”.

“Our task is to find lasting responses founded on the values of humanity, responsibility and firmness,” he said.

Those words will please the likes of Sudanese Abd Al Kareem, who has spent eight months living in a park in Paris, and the thousands of others that will no doubt follow him.

But even if more migrants and refugees like Al Kareem are granted asylum in France, the problems do not end there.

“No one here goes hungry. But that's not the problem,” he told The Local.

“I've got papers, I am going to stay in France…. but what am I going to do?  We need work, we need a place to live, we need to learn the language. How are we going to do that?”