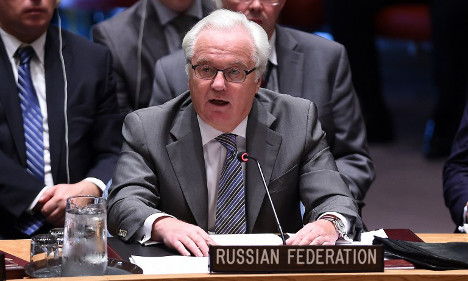 France has launched an initiative to persuade the other four Security Council permanent members — Britain, China, Russia and the United States — to refrain from using their veto when action is required to address a mass atrocity.

“We are against it,” Russian Ambassador Vitaly Churkin told reporters. “We think this is not a workable proposition.”

It was the first time that Russia had come out so clearly in opposition to restricting the use of the veto, which some blame for the lack of effective
measures to end the war in Syria.

The veto power accorded to the P5 dates back to the UN's foundation, but calls for re-thinking its use have mounted as the world body celebrates its 70th anniversary this year.

The French proposal gained traction after Russia and China used their veto power last year to block a resolution asking the International Criminal Court to investigate crimes committed in Syria.

Churkin argued that declaring that mass atrocities have occurred could become a political tool, and raised questions about who would be empowered to make that determination.

“We see it as a somewhat populist proposal. If France wants to limit its own veto they are welcome,” he said.

Russia in July blocked two resolutions by resorting to its veto power, one that would have declared the Srebrenica massacre in Bosnia to be a genocide and another on setting up a tribunal to try those responsible for the downing of Flight MH17 over Ukraine.

France's idea has been welcomed by some 70 non-veto wielding member-states at the United Nations. China and the United States however have also expressed reservations.

France will host a meeting on September 30th on the sidelines of the UN General Assembly session to discuss its proposal, one year after it launched the idea.

Paris had dispatched former foreign minister Hubert Vedrine on a fact-finding mission in April to discuss the possibility of a letter signed by the P5 that would outline their voluntary commitment to restrict the use of the veto.