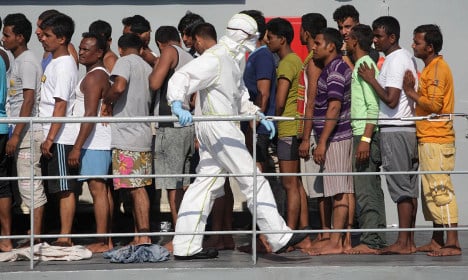 A rescuer walks past migrants waiting to disembark from the Irish military vessel Naimh after its arrival in the port of Palermo. Photo: AFP

The foreign ministers of the three countries signed a joint letter emphasizing “the shortcomings” of the current European asylum system.

In the letter, signed by Frank-Walter Steinmeier, Paolo Gentiloni and Laurent Fabius, they called for “a fair distribution of refugees” throughout the European Union.

“The current refugee crisis is putting the European Union and all of its member states to a historic test. Over the past weeks, this crisis has become even more dramatic,” it read.

“Europe must protect refugees in need of protection in a humane way – regardless of which EU country they arrive in.”

The document was addressed to the EU's foreign policy chief, Federica Mogherini, ahead of an informal meeting of EU foreign ministers in Luxembourg on Friday and Saturday.

Italy has long called for an EU policy on immigration and the creation of a EU law on asylum, something that would require the reform of existing legislation.

Accords reached in Dublin in 1990 on the right of asylum oblige refugees to make their case in the first EU country they reach, where they should also be registered.

But countries in northern Europe complain that Italy and Greece fail to identify the new arrivals, allowing many to continue travelling to seek asylum elsewhere.

Even as the politicians wrote, thousands of people were still trying to reach Germany via rail from Hungary.

Scuffles broke out between migrants and police in Hungary on Wednesday as thousands were left stranded at Budapest's main international train station, while the government called for clarification on Germany's asylum regime.

As the number of migrants prevented from boarding trains to Austria and Germany swelled to over 2,000 at the Keleti station, according to an estimate from an AFP photographer, crowds chanted “No police! No police!” and “Germany! Germany!”

On Wednesday afternoon, the protesters, angry at reports of police removing migrants from the station to unspecified locations, ran up to a police line and began shouting and throwing plastic bottles. Traffic was blocked for around 15 minutes.

The officers were quickly reinforced by riot police, who donned helmets and after a tense standoff pushed the protesters back to stop them blocking the road. No one appeared to have been hurt, and calm gradually returned by nightfall.

The standoff was the latest and largest of several tense encounters between the crowds and police following Hungary's decision to prevent migrants travelling west on Tuesday, after several thousand boarded trains bound for Austria and Germany the previous day.

Hungary's government explained the U-turn by saying it was applying EU law after confusion caused by an easing of Germany's asylum regulations and called on Berlin's embassy to clarify the rules.

Sporadic fighting broke out between migrants on Wednesday, while taunts from a small group of far-right skinheads sparked some scuffles.

Earlier, tempers rose when the police suddenly moved in to clear a pathway in the “transit zone”, a makeshift underground refugee camp where thousands have been sheltering on blankets in cramped conditions, looked after only by Hungarian volunteers.

“My friends got on a train on Monday! Why the hell don't they let me go too, all of us?” 41-year-old Syrian protestor Ohlit told AFP in front of the station, furiously brandishing his ticket to Munich that he purchased on Monday.