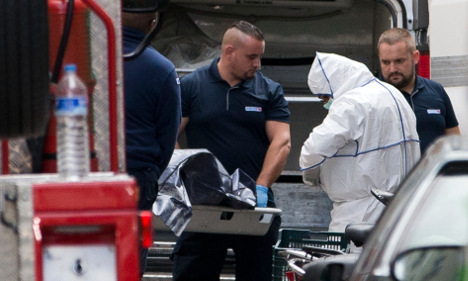 The body of a victim is loaded into a van outside a building in Paris where a fire killed eight people early. Photo: AFP

The fire in the eighteenth arrondissement, the cause of which is unknown, broke out at around 4:30 am (0230 GMT) and took more than 100 firefighters to contain it.

The eight victims included two who died after they attempted to escape through windows, according to police. A source close to the investigation said two children were among the victims.

Police revealed later on Wednesday that a man aged in his 30s was being held in connection with the blaze.

Police arrested a man in his 30s “who might have been at the scene” of the fire, a source at the Paris prosecutor's office said, although he stressed the investigation was at an early stage. The arrest was made on the basis of eyewitness accounts and CCTV footage, the source added.

Images posted on Twitter showed two bodies lying on the street as firefighters battled the blaze around them.

Tissem Ferjani, a pastry chef who lives on the same road, said she had seen “lifeless bodies on the ground” after residents had jumped in a desperate effort to escape the raging flames.

“I was woken up around 4:00 am by people screaming for help. They had no choice — either they stayed where they were and died or they got out through the window and they fell.

“Everyone in the district came out to try to help them.”

They are believed to be the two who leapt from the building to escape the flames.

The fire started on the ground floor before spreading into the stairwell.

One witness named Raphael Norman told BFM TV: “Residents were trying to get into other apartments by climbing between the windows. The inhabitants were screaming and struggling to breathe by putting their heads out of the windows.”

According to Gabriel Plus, a spokesman for the Paris Pompiers, firefighters were called out to the block twice in the night, once at 2.30am and again at 4am.

“We were first called out at 2.24am to a paper fire that started in the hall of the building. The fire was quickly put out, but then we were called again at 4am, this time for a fire that had started in the stairwell.” Interior minister Bernard Cazeneuve, present at the scene, said that in addition to the eight dead, four were in a critical condition.

He said it was “too early to determine the causes of this tragedy”.

A statement from the presidential palace expressed condolences for the victims and paid tribute to the firefighters.

“Everything will be done to shed light on this tragedy and to find out what caused the fire,” said the statement from the Elysée.

Criminal prosecutors have taken over the investigation, suggesting authorities believe the blaze was not an accident.

The fire started on the ground floor before spreading into the stairwell. Paris mayor Anne Hidalgo said around 15 buildings in the working-class area of the district had been affected by the inferno.

The main apartment block affected was a private building, not a block of flats for low-income families, she added. The fire was the most deadly in the French capital since 2005, the year when a wave of apartment blazes left over 50 dead including 24 in one inferno in a flat near Opera. Eleven children were among the dead in that blaze.