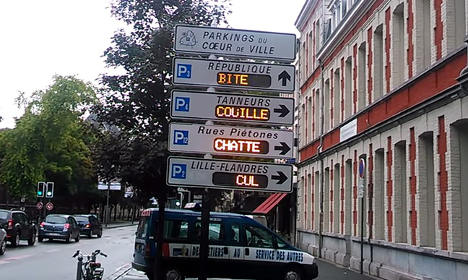 The hacker was protesting against a French court’s decision to drop all charges of pimping against former IMF boss Dominic Strauss-Kahn. Image: ivoidwarranties/YouTube

Anyone looking for parking in the central French city of Lille in late August would have been more than a little surprised to see the sign opposite the police station on the city’s Boulevard Louis XVI.

Instead of the usual information about the number of free spaces in the city’s public car parks, the sign contained the words “bite” (dick), “couille” (ball, or testicle), chatte (pussy), and cul (arse).

But the hacker behind the prank had a serious motive: to protest against a French court’s decision to drop all charges of pimping against former IMF boss Dominic Strauss-Kahn.

The site chosen for the stunt — carried out by tampering with radio frequencies — was actually just metres from the police station where DSK was held in 2012.

In the notes to a short video with evidence of the prank, the hacker with the online moniker “i void warranties” explained the hack had lasted just ten seconds, or long enough to make the video.


“No children were shocked to death…and no car drivers were troubled,” he said

But he did have one last tongue-in-cheek comment about his prank.

“Now if anyone asks where their car is, you can really say it’s ‘dans ton cul’ (‘up your arse’).

Anyone hoping for more such high jinks in future won’t be disappointed. The hacker says his prank was just the first step. “I void warranties” now plans to carry out something much “cooler” and “more educational”.