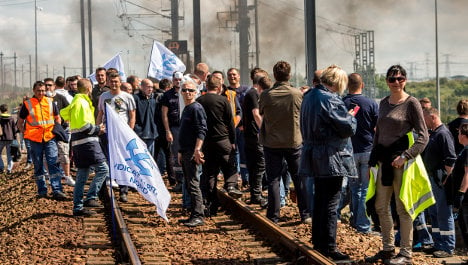 A three-way deal backed by the French government late Monday raised hopes of resolving a long-running dispute that has hampered ferry traffic at Calais and disrupted cross-Channel rail services.

The agreement was reached after eight hours of negotiations, a day after protesting French seamen carried out a six-hour blockade of the key port.

In a statement, the French transport ministry said that under the deal, 402 out of 487 jobs would be saved at the ferry firm Scop SeaFrance.

Scop SeaFrance had been operating the Calais-Dover route under the corporate name of MyFerryLink until it went out of business.

The company's workers protested against plans to sell off some of their ferries to rival Danish firm DFDS, a move expected to result in hefty job losses. Their protests caused havoc on both sides of the Channel, with British police closing off sections of motorway to park some 3,000 trucks waiting to board ferries to France at Dover.

Eurostar passenger services were also occasionally disrupted when the workers occupied the track near Calais.

Under the deal, DFDS and Eurotunnel — which had an operational partnership with MyFerryLink — agreed to create 402 jobs, the transport ministry said in a statement.

Staff made redundant would also receive “settlement compensation” until January 1, 2016.

The contents of the agreement will be presented to members of the seamen's union at a meeting Tuesday afternoon.

The deal was signed by union officials, Eurotunnel and DFDS and was initialled by Transport Minister Alain Vidalies, who hosted the talks, Scop's liquidators said. Two ferries, the Rodin and Berlioz, that have been occupied by the protestors for the last two months will be handed over on Wednesday.

“These vessels will then be deployed on the Calais-Dover route during the third quarter of 2015, along with the ferry Calais Seaways,” DFDS said in a statement.

“It means that three ferries will operate on this route instead of two currently.”

On Sunday, thousands of holidaymakers were stranded when two lifeboats with protesting seamen onboard took to the port's waters, prompting the harbourmaster to halt traffic for safety reasons.

Calais has also been the scene of cat-and-mouse games between police and hundreds of migrants trying to smuggle themselves into Britain via the undersea Channel Tunnel that links the two countries.