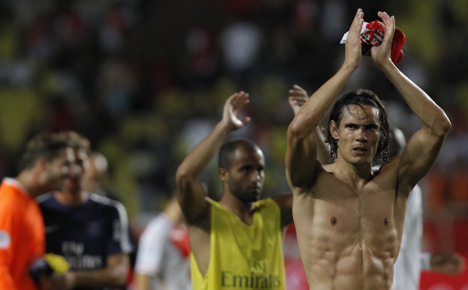 With four wins out of four, including Sunday night's emphatic 3-0 triumph over rivals Monaco, some in France have suggested big spending PSG have already won Ligue 1.

“Paris crush Ligue 1” was the headline in Le Parisien, while BFM TV said the Qatari owned club from the capital were proving to be “untouchable”.

Angel di Maria made his debut as a second half substitute as champions Paris Saint-Germain maintained their perfect start to
the season with a 3-0 win at Monaco on Sunday.

Argentine Di Maria played his first 24 minutes for the Parisians following a 63 million-euro ($68.9 million) move from Manchester United and even set up PSG's final goal.

But it was Uruguay striker Edinson Cavani who was the hero, notching a brace before Ezequiel Lavezzi finished off the scoring. (The headline in the Le Parisien: Paris crush Ligue 1, suggests the title race is already over)

“(Di Maria) is going to be a vital element. With Lavezzi, they have a lot of complicity, that's going to help Angel acclimatise.”

The win put PSG three points clear of the pack as Monaco remained in mid-table.

“We're disappointed because our aim is always to win, but Paris were better than us,” admitted Monaco coach Leonardo Jardim.

Cavani had the best chance of the opening period a couple of minutes before the break, but picked out by Maxwell's inch-perfect pass, he swiped wildly at the ball, which hit his standing leg before bobbling wide.

Monaco's Italian striker Stephan El Shaarawy had a sight of goal early in the second period but shot straight at goalkeeper Kevin Trapp.

Cavani broke the deadlock on 57 minutes with a bullet header into the top corner from Blaise Matuidi's pinpoint cross, leaving goalkeeper Danijel Subasic a helpless spectator.

Di Maria entered the fray on 66 minutes in the place of Lucas Moura and should have had his first assist for the club almost immediately, but after arrowing an inch-perfect ball into the box, Cavani directed his free header straight at Subosic.

But Cavani did not need to wait long for his second and showed a predator's instincts on 73 minutes as Monaco's backline stood off Zlatan Ibrahimovic, who slipped in the Uruguayan between full-back and centre-back for an easy finish.

Serge Aurier squandered a great chance with a sliced shot after bursting into the box although Cavani was in perfect position in front of goal to complete his hat-trick.

Earlier on Sunday, Saint-Etienne scored either side of half-time to defeat Bastia 2-1 at their Geoffroy-Guichard stadium to end the Corsicans' unbeaten start to the Ligue 1 season.

Just three days after qualifying for the Europa League group phase, Christophe Galtier guided his side to a second win of the domestic season thanks to a 20th minute strike from captain Loic Perrin and then a 62nd minute winner from on-loan Valentin Eysseric.

Bastia had pulled level four minutes before the break through Gael Danic but slip to sixth in the table after their first defeat in four outings.

Tunisian midfielder Wahbi Khazri grabbed the all-important opener right on the stroke of half-time before 19-year-old Serbian defender Milan Gajic wrapped up the victory with a strike three minutes from time.

The defeat was the first of the season for the Canaries.

On Saturday, Lyon returned to winning ways as they rode a Nabil Fekir hat-trick to a 4-0 thrashing away to Caen while Rennes claimed their place in the top three with a 3-1 home victory over Toulouse.

Reims are second on goal difference following a 4-1 dismantling of suffering Brittany side Lorient, while Lille won for the first time under new coach Herve Renard when they edged Ajaccio 1-0.

On Friday, Marseille came back to earth with a thud following their 6-0 thrashing of Troyes last week in new coach Michel's first match in charge, but it all went wrong at Guingamp where they slumped to a 2-0 reverse.

A barrier at Bordeaux's new stadium gave way during the Ligue 1 clash between the 'Girodins' and Nantes on Sunday, injuring five people.

At the brand new complex, named the Nouveau Stade de Bordeaux and primed for Euro 2016, the incident took place in the 87th minute when Bordeaux fans were celebrating their team's second goal in a 2-0 victory.

“We counted five injuries, two of those to young boys of 12 and 14 who were picked up by their parents,” said one of the club's security officials.

A similar incident took place on May 23 when the stadium was officially opened and led to another barrier collapsing when Bordeaux fans celebrated the first goal at the new venue. On that occasion there were no serious injuries.