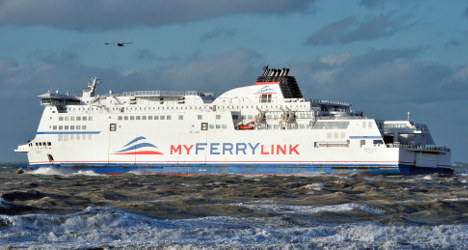 French sailors from My Ferry Link have lifted their latest blockade of Calais. Photo: AFP

Sailors from the bankrupt firm Scop SeaFrance who had used lifeboats to block the busy hub on Sunday will now hold talks with government officials, a senior union official told AFP.

“I lifted the blockade because the prefect (of the Pas-de-Calais region) allowed us to unload equipment belonging to SeaFrance,” Eric Vercoutre told AFP, adding that sailors would now hold talks with government officials.

Local authorities and ferry companies P&O and DFDS, which saw thousands of their customers delayed by the blockade — some stranded on the boats themselves — confirmed the action had ended.

Sea traffic was stopped at the harbour from around 07:30 pm (1730 GMT) “for security reasons” when two boats, which Vercoutre said contained some 25 sailors, took to the port's waters.

The ferry route from Dover in England to Calais is one of the busiest in Europe but was particularly jam packed with British holidaymakers using it to get to France over the long weekend, due to Monday being a public holiday.

Scop SeaFrance workers have for months been protesting against plans to sell off some of their ferries to DFDS, a move that had led to fears of hundreds of job losses.

The latest action by the seamen comes on the eve of a meeting on a deal aimed at resolving the dispute, under which up to 407 of the 487 sailors would keep their jobs.

Calais has also recently been the scene of a cat-and-mouse game between police and hundreds of migrants trying to smuggle themselves into Britain via the undersea Channel Tunnel that links the two countries.

On Monday, Prime Minister Manuel Valls is to travel to Calais along with two EU commissioners to discuss the migrants issue.

P&O on Sunday was forced to reroute boats carrying thousands of people to the French port of Boulogne-sur-Mer while Danish firm DFDS sent its ferries to Dunkirk, further north along the French coast.

P&O earlier said one of its its ferries had been left stuck in the port with 2,000 passengers onboard, and two others carrying 1,700 and 1,500 people were “waiting off Calais to be able to enter” the port.

A fourth vessel carrying 900 people was left stuck in Dover, she said, noting that the protest was taking place on one of the busiest weekends of the year for British holiday traffic.

A spokesman for the Port of Dover earlier said authorities there were monitoring the situation and hoped “to resume normal operations as soon as possible”.

The action earlier in the month also sparked cancellations on the Eurostar train service between France and Britain.