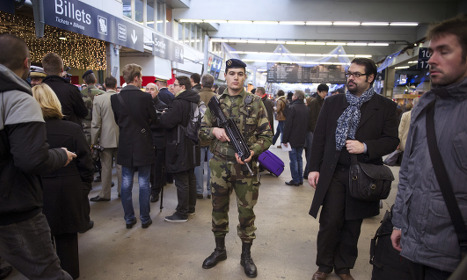 The group of ministers meeting in Paris also called for increased checks on passengers and baggage at major stations and for the European Commission to tighten gun laws, in a joint statement read by French Interior Minister Bernard Cazeneuve.

“It is indispensable to put in place coordinated and simultaneous checks on certain targeted routes,” said Cazeneuve, adding that efforts were underway to improve information-sharing on suspected jihadists.

The ministers called on the Commission to reinforce gun laws by the end of the year “to reinforce traceability… and fight trafficking (of arms) on the Internet”.

Cazeneuve said multinational patrols already existed in major stations, but that ministers had agreed to increase their “efficiency and use them more”.

“We will also work to evaluate the consequences of introducing named tickets for international, long-distance trains,” he said.

The ministers from Belgium, Britain, France, Germany, Italy, Luxembourg, The Netherlands, Spain and Switzerland arranged to meet in Paris in the wake of a foiled jihadist attack on a train from Amsterdam to Paris on August 21.

French prosecutors have charged Ayoub El Khazzani, a 25-year-old Moroccan, with the “targeted and premeditated” attack after he stepped out of a toilet cubicle with an assault rifle, 270 rounds of ammunition and a Luger pistol strapped to his chest.

He was quickly overpowered by a group of French, British and American passengers, who have since been awarded France's top honour, the Legion d'Honneur.

The EU will convene security experts on September 11 to discuss the proposed measures, and transport ministers are due to meet the following month in Luxembourg to decide if new legislation is needed.

EU Transport Commissioner Violeta Bulc, who attended Saturday's meeting, said: “The security and safety of passengers is our first priority. But of course we must not overreact.

“It is essential that, as far as possible, public transport remains open and easily accessible.”

Officials are limited in how much they can do to monitor suspects within the borderless “Schengen zone”, which covers 26 European countries.

But there have long been calls for greater intelligence cooperation between countries.

Khazzani was on the radar of several European intelligence agencies. He was first flagged as an Islamic extremist by authorities in Spain, where he lived until 2014.

He left Spain for France, where he worked for a mobile phone operator for two months before being let go and disappearing.

Then in May this year, he popped up on intelligence radars once again when German authorities warned he had boarded a plane in Berlin bound for Turkey.

In June, he surfaced in Albania, and on August 21, Khazzani boarded the train in Brussels, where his sister lives and he is believed to have lived for some time.

Experts have warned that little can realistically be done to guarantee safety on trains.

“Airplanes leave from a specific place — you can build a security apparatus around them,” said Raffaello Pantucci, a terrorism expert at the Royal United Services Institute in London.

“It's just not possible to do that with trains. You would have to do that at every station from large terminals in Paris to small towns in rural France.”