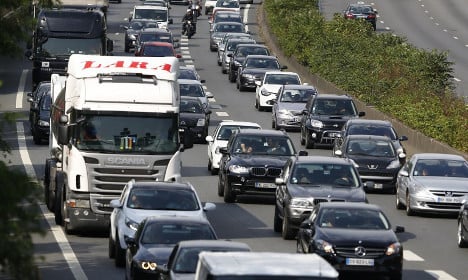 Being stuck in a car or a train will not be pleasant this weekend. Photo: AFP

After a long and (very hot) summer in France, most French children will return to school next week, meaning many families will be heading home this weekend to prepare for the term ahead.

France's traffic info service Bison Futé is well aware of the potential chaos, and has forecast a weekend of heavy traffic – especially on Saturday for which they've issued a nationwide red alert.
“It's going to be three days of difficult conditions on the road,” the service noted.
Here is a breakdown of where to avoid if you too are heading home this weekend. Friday:
The Rhone-Alpes-Auvergne area in south eastern France has been given a region-specific red alert for holidaymakers heading home.
The service issued an orange alert nationwide for others returning home.
It noted that many of the major highways in the south, and the areas around the country's bigger cities, were all worth avoiding after 11am until the late evening.
Saturday:
It predicted an especially difficult day on all highways and issued a nationwide red level alert.
It issued warnings that highways coming from the popular holiday hotspot Spain would be especially congested all day, and the border to Italy would be troublesome in the late afternoon.
Approaching Paris from the south, west, and north-west was also tipped to be a complicated procedure (see map below). (This map shows the areas forecast to be worst hit over the weekend. Photo: Bison Futé)
Sunday:
A nationwide orange alert for returning holidaymakers, but the service noted that there would be a drastic reduction in traffic compared to the previous day. The worst areas are tipped to be in the southern half of France as the French return from the coast.
If you're heading back to Paris on Monday, the service advised motorists to avoid the A10 and A6 motorways between 3pm and 9pm.
For more traffic information for France, consult Bison Futé (in English) throughout the weekend.