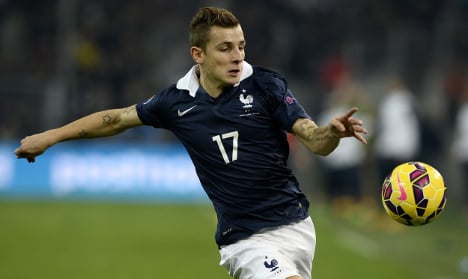 After completing a medical, Digne, 22, signed with the Giallorossi in a one-year deal that will see Roma pay PSG 2.5m euros and could end up with the 22-year-old making the move permanent.

Key to the transfer was Roma coach Rudi Garcia, who while in charge of PSG's Ligue 1 rivals Lille handed Digne his first-team debut for the club in 2011.

Digne, who was a member of the France Under-20 side crowned world champions in 2013, told Roma TV: “I chose Roma because it's a legendary club with a great history. I know that in this city and at this club there's everything you need to succeed.”

It was at Lille that Digne, despite still being a teenager, first impressed and in his second season with the northern French club he made seven appearances in the Champions League.

Digne signed a five-year deal with PSG two seasons ago and in his short time with the capital club won two league titles and the French Cup.

Garcia – who has guided Roma to two successive runners-up finishes behind Juventus in Serie A – admitted two weeks ago strengthening his defence was a priority after the club sold Greek international Jose Holebas to newly-promoted English Premier League side Watford and French defender Mapou Yanga-Mbiwa joined Lyon.

Since then they have signed Slovakian Norbert Gyomber from Catania on a season-long loan deal, which includes an option to make the transfer permanent. VfB Stuttgart defender Antonio Ruediger was also signed on a similar deal last week.

The recent arrivals have left a question mark over the future of former Chelsea defender Ashley Cole, who is still a Roma player.

Cole was given his chance to shine last season but was spectacularly exposed during a stunning 7-1 home defeat to Bayern Munich in the group stages of the Champions League.

He was given few opportunities by Garcia in the wake of his poor performance and has been linked with a move away from the club.

Roma, held to a 1-1 draw away at Verona in their league opener on Saturday, host champions Juventus this weekend.