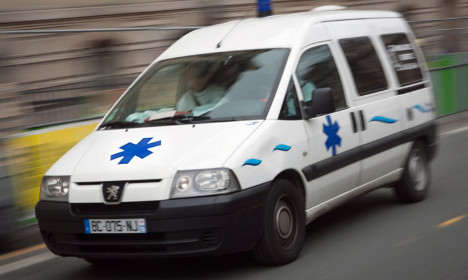 The 11-year-old boy fell from the roof of his apartment block in Montrouge, southern Paris, on Tuesday.
Neighbours saw the boy jumping around between his windowsill and a ledge. Police sources said the boy successfully managed to make one of the leaps, but fell trying to do it again, reported Le Parisien.
One neighbour saw the child at play and rushed to alert the boy's mother, who did not respond. (The facade of the building where the boy fell. Photo: Google Streetview)
“It was horrible. I've had nightmares about it. I have children too, and we thought the worst,” she told the paper.
As luck would have it, however, the boy survived the fall. His descent was slowed after he hit some kind of barrier on the way down, eventually landing on in a back garden with loose soil on the ground.
The boy was unconscious when paramedics arrived on the scene and had a broken leg. He was taken to the local Necker hospital, where he remains in a stable condition.
The boy's mother has been left shaken.
“We are still trying to get our heads around all this. We don't know where exactly he was or how he fell,” she said. (Montrouge, to the south of Paris. Photo: GoogleMaps)
Url copied to clipboard!