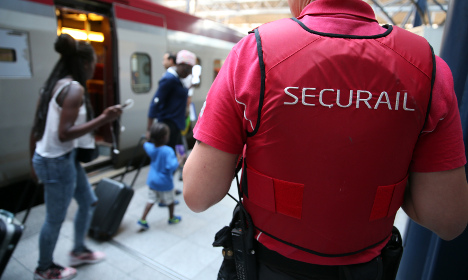 A Securail railway security agent stands on the platform at the Zuid-Midi railway station in Brussels. Photo: Nicolas Maeterlinck/Belga/AFP

The journalist, who works for the Belgian news site La Dernière Heure, boarded a train between Brussels and Nice on Monday with a fake machine gun and knife with a 20-centimetre blade.

At one point on his journey, the journalist, identified in the media as Michel, even left the gun poking out of his bag for ten minutes. He later got off at station in Lille, northern France, where he asked some soldiers for information.

Finding that even this did not rouse any suspicions, the journalist then put on sunglasses and a hood over his head.

He was later able to return to Brussels without any problems.

In an article published on the Belgian news website on Tuesday, the journalist said he had set out to test how well the “promised increase in security measures” were working on Thalys trains and international mainlines.

The journalist made the journey just three days after the foiled terror attack which saw a man board a high-speed train in Brussels armed with a Kalashnikov assault rifle and 270 rounds of ammunition, as well as a Luger pistol, a bottle of petrol and a box-cutter.

Then, the attacker walked out of a toilet cubicle armed and topless before being wrestled to the floor and subdued by two young American off-duty servicemen, their friend and a 62-year-old British consultant. All of the men have since been given France's top honour, the Legion d'Honneur.

A Franco-American man was shot and wounded in the attack.

The gunman, Moroccan national Ayoub El Khazzani, was on Wednesday charged with attempted murder of a terrorist nature and remanded in custody.

The gaps exposed in the security on the country’s rail network has also been a heated topic of discussion among France’s politicians.

On Monday France’s ecology and transport minister Segolène Royal called for tougher security on the country’s rail networks and for security gates to be installed at French train stations.

“We could start with trains that cross borders,” Royal told iTélé.

The minister also expressed support for random checks in stations which could be carried out by employees of the state-run railway company, SNCF, as well as security firms.

On Saturday interior and transport ministers from countries neighbouring France will hold talks in Paris to discuss security measures in the wake of the attacks.