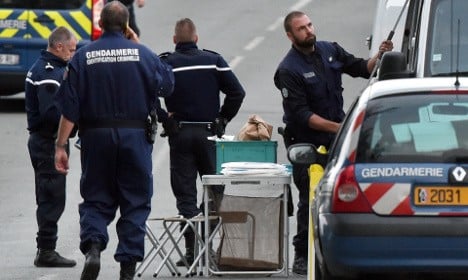 Members of the gendarmes forensic unit set up a workspace on a road near a traveller camp. Photo: Philippe Huguen/AFP

The suspect is accused of killing three members of the same family, including a 19-year-old woman, her nine-month-old daughter and her father-in-law at a campsite in the northern town of Roye, about 110 kilometres north of Paris.

The man is also accused of shooting a policeman who was badly wounded in the attack and later died of his injuries.

Two other people – a policeman and a three-year-old boy were also injured, but are in stable conditions.

Investigators said on Thursday that the gunman had a blood alcohol content of 2.28 grams/litre of alcohol in his blood stream – over four times the legal driving limit of 0.05 grams/litre.

According to Bernard Farret, the prosecutor in the case, the suspect fired around 30 shots following a year-long feud between himself and the family. (Police officers investigate at the traveller camp. Photo: Philippe Huguen/AFP)
“There was an argument with remarks exchanged between the family and himself a year ago,” Ferret said, adding that the shooting had occurred following an intervention by police.

Speaking after the attack Interior Minister Bernard Cazeneuve described the case as “tragic”, saying the family had been “decimated by the killer”.

President Francois Hollande and Prime Minister Manuel Valls also expressed shock over the incident, sending their condolences to the families of the dead and wounded.

“My thoughts are with the families, with the victims and the policeman killed in the service of France,” said Valls on Twitter.

In a statement released by his office, Hollande hailed the “courage and commitment” of the police officers who responded to the incident, extending condolences to the families of those killed and injured in the attack. (The town of Roye, north of Paris. Photo: GoogleMaps)