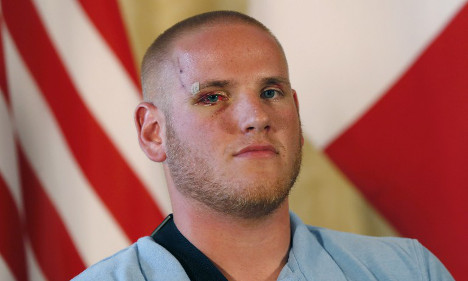 Spencer Stone has been labelled as a hero in France and beyond. Photo: AFP
The airman, Spencer Stone, and his friend Alek Skarlatos, a National Guardsman, helped wrestle to the floor the assailant who opened fire after boarding a high-speed train in Brussels bound for Paris, witnesses said.
Stone suffered hand and eye injuries in the incident, which has already earned him France's Legion of Honor, the country's highest award.
“Their fearlessness, courage and selflessness should inspire all of us,” Secretary of the US Air Force Deborah Lee James said, as she announced that Stone's unit was nominating him for the Airman's Medal.
“What the gunman didn't expect,  however, was a confrontation with our very own Captain America.”
James said Stone — who travelled on Monday with Skarlatos to Germany, where he is to be treated at a US military hospital — is “doing quite well but needs some rest.”
Stone could also be considered for the Purple Heart award, if the thwarted train attack is characterized by French law enforcement as a terror-related event.
Traditionally awarded only to troops killed or wounded in combat, the Purple Heart was in April awarded to those wounded in the 2009 Fort Hood shooting, after it was deemed an act of international “terrorism.”
French President Francois Hollande on Monday awarded the Legion of Honor, the country's highest honor, to Stone, Skarlatos, their friend Anthony Sadler and a British business consultant. Stone wore a sling during the award ceremony.
Anti-terror investigators are questioning the alleged attacker, 25-year-old Ayoub El Khazzani, who authorities said boarded the train with a Kalashnikov assault rifle, an automatic pistol, ammunition and a box cutter.
Url copied to clipboard!