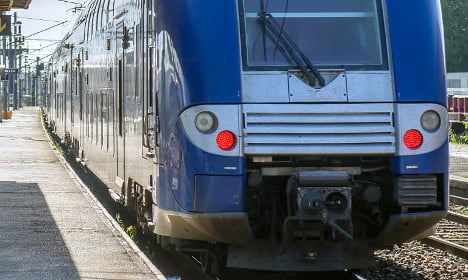 The two men have been sentenced to prison for their threats. Photo: AFP
The French public were still on high alert on Sunday morning after a terror attack was thwarted on a Paris-bound train on Friday.
Perhaps with this in mind, two men in their early twenties thought it would be a laugh to threaten a terror attack on another train, this one bound for Mantes-la-Jolie, north west of Paris.
The men, aged 22 and 23, told passengers on the train that “everything was about to blow up” and that they would kick off a “Charlie Hebdo 2”, referring to the terror attack at the Charlie Hebdo offices in Paris in January that left 12 dead.
The pair reportedly asked train passengers if they were Muslim, telling them to clear out quickly if this were the case to be spared.
One witness told Le Parisien that the men claimed to have put a bomb under one of the seats.
Terrified passengers alerted the driver, who stopped the train and waited for police.
The men were promptly arrested, and by Monday evening were sentenced to three years and 18 months of prison respectively for glorifying terrorist acts (apologie d'actes terroriste).
One of the men, named as Taoufik by the paper, claimed that he was drunk at the time, and didn't remember a thing. His companion, meanwhile, claimed he wasn't involved at all. Investigators found that while the men had alcohol in their blood stream, it wasn't excessive.
During the court hearing, Taoufik also claimed his actions were sparked after another passenger made a racist remark to him.
However, the Nanterre judge ignored the men's pleas in his verdict on Monday, making reference to Friday's foiled attack.
“If it wasn't for the intervention of some young Americans then there would have been a massacre,” the judge said, referring to the foiled terror attack on Friday, reported Europe 1 radio.
“And by Sunday, you think it's funny to tell people there is a bomb on the train? Do you have any idea of the trauma that you have caused?”