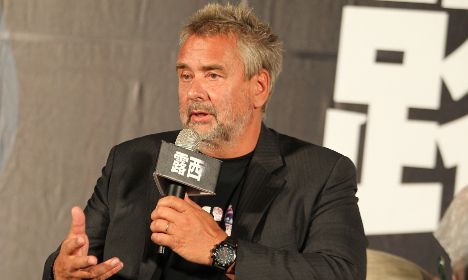 The filmmaker, perhaps best known globally for his high-octane — and English-language — “Transporter” and “Taken” movie franchises and “The Fifth Element”, explained to French radio that “Valerian” would likely not qualify for French tax credits because it would be filmed in English, not French.

Those credits are vital for the movie, which will star Clive Owen, Cara Delevingne and Dane DeHaan and whose budget of around €170 million ($195 million) — unprecedented for France — rivals those of big Hollywood productions.

“There's a small problem called tax credits… I have a French film being made in English so I have the right to zero (credits) as a French film,” Besson told radio station RTL on Monday.

Even if he tried to pass the movie off as a foreign production, he said he would still not qualify because his production company EuropaCorp is French.

“I'm in a legal black hole,” he complained.

As a result, “I don't know if I can film it in France” even though “I want to make it in my country with a French crew”.

He noted that, if he filmed in Hungary, he could recover credits worth up to 40 percent of his company's investment.

Besson's public airing of the problem, which seemed aimed at pressuring French authorities, came weeks after EuroCorp confirmed that the 56-year-old French filmmaker had become a US tax resident. Besson says he still pays most of his taxes in France.

“Valerian”, which is slated for a July 2017 release, is based on a long-running French graphic novel series started in the 1960s about an eponymous space- and time-travelling agent and his smart and sexy female companion Laureline.

DeHaan, a 29-year-old American actor who played the villain Green Goblin in 2014's “The Amazing Spider-Man 2”, will be the star of the movie, alongside 23-year-old British model-actress Delevingne as Laureline. Clive Owen, also a Briton, will play a space commander.

Filming of the movie is expected to start early next year and 1,200 crew members will be involved in the six-month shoot.