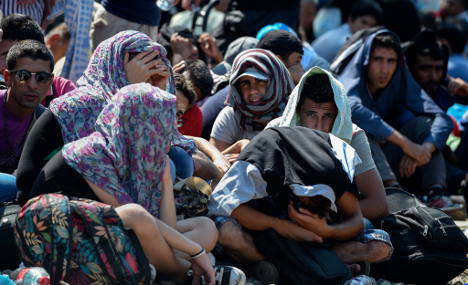 The crisis also threatens to hijack a summit in Vienna of leaders from the western Balkans region which Chancellor Angela Merkel is set to attend.

“We must put in place a unified system for the right to asylum,” French President Francois Hollande said in a brief statement ahead of talks with Merkel, calling the influx from the world's crisis zones “an exceptional situation that will last for some time”.

“Rather than wait, we should organize and reinforce our policies, and that is what France and Germany are proposing,” Hollande said.

More than 1,000 migrants and refugees arrived in EU member Hungary late on Monday, the first in a wave of about 7,000 people who found their gruelling journey to Europe blocked last week, when Macedonia declared a state of emergency and closed its Greek border for three days.

An AFP photographer witnessed them finally arrive in Hungary from Serbia via a cross-border railway track, close to the southern Hungarian village of Roszke.

Their crossing comes just days before the Hungarian government deadline of August 31st for the completion of a razor-wire barrier along the length of its southern border with Serbia – which is not a member of the EU – in a bid to keep migrants out.

But it's not just about people fleeing violence in places like Syria, Iraq and Afghanistan. The impoverished countries in the western Balkans are themselves the source of huge numbers of migrants.

Of the 44,000 irregular migrants detected crossing between western Balkan countries and between these countries and the EU in the first quarter of 2015, 27,000 were nationals of the region, according to Frontex.

According to Dusan Reljic at the German Institute for International and Security Affairs (SWP), this is because the economic situation there is “disastrous”, with growth non-existent, unemployment sky high and investment feeble.

“In Macedonia the average monthly salary is €350, less than in China,” the Balkans expert told AFP. “Something like half of the people applying for asylum in Germany are from the western Balkans.”

The credibility of prospects of these countries joining the EU “has largely evaporated, and the poorest of the poor have abandoned hopes of improvement and ever achieving a life with dignity.”

But Hollande and Merkel reiterated their calls on Monday for Brussels to draw up a list of safe countries of origin.

Germany in particular sees this as a priority, as 40 percent of its asylum-seekers come from countries such as Albania and Kosovo.

Merkel is travelling on Thursday to Vienna, where she will meet Balkan leaders to find out why “so many thousands of people are coming from these countries”, her spokesman Steffen Seibert said.

Other coordinated action sought by Hollande and Merkel includes the rapid setting up of reception centres in overwhelmed Greece and Italy – two countries that have borne the brunt of the crisis – to help identify asylum-seekers and illegal migrants.

Merkel stressed that the centres must be set up at the first ports of call to be administered and staffed by the EU as a whole by the end of the year.

“We cannot tolerate a delay,” she said.

Merkel also condemned on Monday continued attacks against refugee and asylum-seeker homes that Germany has seen again this week, beginning with violent riots in Heidenau, Saxony over the weekend.

Two different intended asylum-seeker homes went up in flames so far this week, one building in Unterweissach, Baden-Württemberg on Monday and another in Nauen, Brandenburg on Tuesday.

The fire in Unterweissach left the asylum home completely destroyed, but no one was injured. The incident is under investigation and police said they had not ruled out arson.

The Nauen fire began just days before asylum-seekers would have moved in.

Police in Brandenburg said the fire was most likely not caused by a technical problem in the building and that they were investigating whether it was arson.