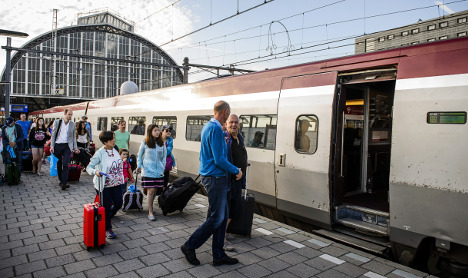 Four days after the foiled attack on a Paris-bound train on Friday, inevitable questions are being asked about the level of security on the country’s trains.

Speaking on Monday on iTélé, Ecology and Transport Minister Segolène Royal called for security gates to be installed at French train stations.

“We could start with trains that cross borders”, she said.

Royal also expressed support for random checks in stations which could be carried out by employees of the state-run railway company, SNCF, as well as security firms.

However she insisted that the checks would not be discriminatory.

“For example they can open big bags,” she said. “If there is a suspicious bag, it makes absolute sense that it would be checked.”

Royal’s comments echo those of the Secretary of State for transport, Alain Vidalies, who on Europe1 on Monday morning suggested the reinforcement of “human, military and police resources” with “random checks of luggage by specialized staff”.

However Guillaume Pepy, the president of the SNCF, said the measures were not realistic.

“I think that the question of extending the system from airports to train stations is not realistic today,” he said.

He also dismissed enforcing checks on all high-speed and international trains.

“Either you are like Eurostar, in a completely closed area, or you are in an open area” where “your efficiency is weak”, he said.

While Royal’s suggestions may never see the light of day, other security measures are in the works, including a new emergency telephone number for trains, which will become operational from September 1st.

Passengers will be able to call the 3137 to raise the alarm about any abnormal situations on French trains.

Meanwhile, anti-terror investigators have until Tuesday evening to question the alleged attacker, 25-year-old Ayoub El Khazzani, who boarded the high-speed train in Brussels on Friday armed with a Kalashnikov assault rifle, a Luger automatic pistol, ammunition and a box-cutter.

Witnesses said he opened fire, injuring a man before being wrestled to the floor and subdued by three young Americans — off-duty servicemen Alek Skarlatos and Spencer Stone and their student friend Anthony Sadler — and a Briton, 62-year-old business consultant Chris Norman.