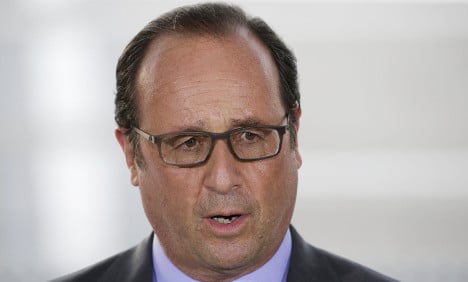 President Francois Hollande warned Tuesday that France must brace for further attacks, just days after a potential bloodbath
on a train was foiled by passengers.

“This attack is fresh proof that we must prepare for other attacks and therefore protect ourselves,” he told diplomats gathered in Paris.

Ayoub El Khazzani, a 25-year-old who boarded the high-speed train in Brussels on Friday armed with a Kalashnikov assault rifle, a Luger automatic pistol, ammunition and a box-cutter, is being grilled by anti-terror investigators.

“The aggression that took place on Friday… which could have degenerated into a monstrous carnage… is fresh proof that we must prepare for other attacks and therefore protect ourselves,” said Hollande.

Under French law, authorities can question Khazzani for four days after detaining him, a deadline that expires Tuesday evening.

At that point, they are expected to either charge him or apply for an extension.

Witnesses said he opened fire, wounding a man before being wrestled to the floor and subdued by three young Americans — off-duty servicemen Alek Skarlatos and Spencer Stone and their student friend Anthony Sadler — and a Briton, 62-year-old business consultant Chris Norman.

France has already been on high alert since extremist attacks in Paris in January left 17 people dead.