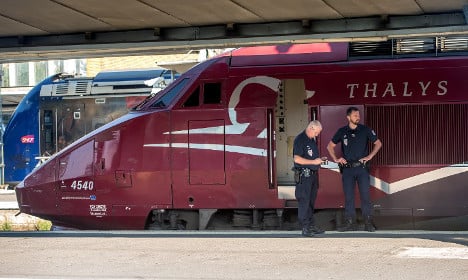 Police at the scene after the train arrived in Arras, northern France. Photo: AFP
Is he an Islamic extremist who wanted to wage a jihadi attack? Or is he just a homeless man who found a stash of weapons and decided to rob the train, as he claims?
The small and scrawny 25-year-old boarded the train in Brussels bound for Paris on Friday armed with a Kalashnikov assault rifle, a Luger automatic pistol, ammunition and a box-cutter.
Witnesses said he emerged from a toilet cubicle holding an AK-47 and sporting a backpack, and fired at least one shot, injuring a man.
He was then wrestled to the floor and subdued by three young Americans — off-duty servicemen Alek Skarlatos and Spencer Stone and their student friend Anthony Sadler — and a Briton, 62-year-old business consultant Chris Norman.
Attended radical mosque
Khazzani had been flagged by intelligence services in Spain, France, Belgium and Germany as an Islamic extremist.
He moved to Spain from Morocco in 2007 when he was 18, and lived first in Madrid then in the southern port city of Algeciras.
“He was a very good boy, very hardworking,” his father Mohamed El Khazzani told British newspaper The Telegraph.
“I have no idea what he was thinking and I have not spoken to him for over a year.”
The suspected gunman “never talked politics; just football and fishing,” his father told the Telegraph in between sobs.
But Spanish intelligence authorities paint a very different picture of a man who appeared to live off odd jobs and drug trafficking.
According to the Spanish daily El Mundo, Khazzani went to a radical mosque in Algeciras along with his father, and the red flag was raised when he made hardline, public comments defending jihad.
His father said that he left for France in 2014 for a six-month work contract for a telephone company, but that he was let go after just one month.
After that, where he was is anyone's guess.
Spanish intelligence services say he went to Syria from France, but the suspect has reportedly denied going to the conflict-ridden country where the Islamic State group controls swathes of territory.
French sources, meanwhile, say that while they had flagged him after Spain warned them Khazzani was coming their way, he never showed up on their radars until May this year, when German authorities said he had boarded a plane bound for Turkey.
The 26 countries in Europe's Schengen Area have abolished border controls, which means people living in or visiting those nations can travel virtually undetected.
Then on Friday, Khazzani boarded the Amsterdam-Paris train in Brussels, where it is believed he was living.
No 'misfit'
He is said to have told investigators he is “dumbfounded” by accusations he was intending to carry out a terror attack, and has portrayed himself as a homeless man who was sleeping rough in Brussels, happened to find a bag of weapons and decided to rob a train.
“The only kind of terrorism that he is guilty of is committing terrorism for food, he doesn't have money to eat well enough,” his father told El Mundo.
His robbery claim was however dismissed by Sadler, the 23-year-old student who helped tackle him to the ground.
“It doesn't take eight magazines (of bullets) to rob a train,” he told reporters on Sunday.
Skarlatos, one of those who overpowered him and an off-duty member of the National Guard in Oregon, says he “clearly had no firearms training whatsoever” — suggesting he was not coached in using weapons by someone with expertise in the matter.
But according to the Le Parisien daily, Khazzani appeared to know what he was doing, as he was using a telephone that was only activated on Friday.
“This telephone had no numbers, no contacts,” an unnamed official is quoted as saying.
“Using a mobile that is exclusively reserved for the day of the attack displays quite a professional character. He seems to be less of a misfit than he lets on.”
Url copied to clipboard!