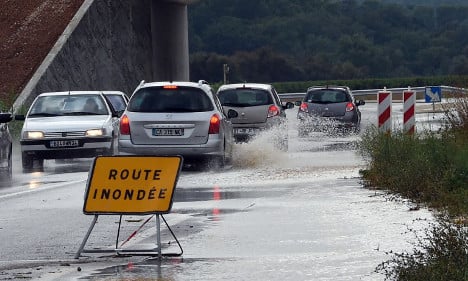 Météo France, the country's meteorological service, issued orange alert warnings for three départements in France on Monday, down from an initial warning for 14 in the morning.

That's the second-highest warning level and asks the public to be “very vigilant”.
The areas on alert are: Alpes-de-Haute-Provence, Indre, and Indre-et-Loire (see map below). Photo: Météo France
The agency noted that there will be exceptionally strong winds and torrential rainfall in central France, which will carry over from where they hit the western coast earlier on Monday. Pointe de Chemoulin was particularly hard hit, recording wind speeds of 113 km/h earlier on Monday.
On the south-eastern side of France, strong winds and thunderstorms are predicted to continue. Météo France issued an orange warning for Alpes-de-Haute-Provence, forecasting that rainfall of up to 50ml could hit in a very short time.

Torrential rain and subsequent flooding took the lives of three French people over the weekend. An elderly couple died in Montpellier after their car washed away, and a Parisian on holiday in southern France died when his caravan toppled over in the wind. Two people died after their car was washed away in Montpellier. Photo: AFP

Rail traffic was also delayed after a mudslide hit the tracks in the Languedoc-Roussillon region of southern France, but trains were running as normal again by Monday morning.
Monday's weather warnings are in place until 8pm.