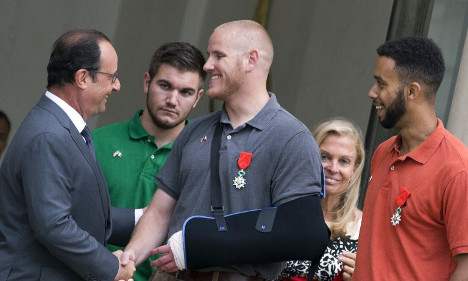 France's President Francois Hollande meets with the heroes. Photo: AFP
Hailed as “heroes”, the foursome were handed the prestigious Legion d'Honneur by French President Francois Hollande, who told them the whole world “admires their courage and cool composure.”
Another Frenchman was due to be honoured too as he was the first who came in contact with gunman Ayoub El Khazzani and tried to stop him. But he has asked to remain anonymous.
Here are the five and the role they played in foiling what could potentially have been a bloodbath:
Spencer Stone
Spencer Stone, a US Air Force member, was the first to reach the gunman before being slashed in the neck and hand with a box-cutter.
He had just woken up from a “deep sleep” when he turned around and saw the alleged attacker, who was holding an AK-47, and he ran towards him, his friend Alek in close pursuit.
“We tackled him and he hit the ground, and Alek grabbed the gun while I put him in a choke hold. He kept pulling more weapons left and right.
“He pulled out a hand gun and a box cutter and started jabbing at me with that.”
The 23-year-old was described by the others as strong and quick, and with the presence of mind to help stanch the bleeding from the seriously wounded passenger, even while hurt himself.
“I saw he was squirting blood out of his neck and I was going to use my shirt, but that wouldn't have worked.
“I stuck two of my fingers in the hole and found what I thought to be the artery and pushed down and the bleeding stopped, and I held that until the paramedics got there.
An airman first class, he is stationed at Lajes Air Base in the Azores. Stone is originally from the Sacramento suburb of Carmichael in California. Alek Skarlatos
Skarlatos, a member of the Oregon National Guard, had recently completed a deployment to Afghanistan and was treating himself to a monthlong European vacation with his friends, US media reported.
His father Emmanuel Skarlatos told KATU News he was inspired by his 22-year-old son's actions.
“He said he and his friend took down a terrorist on a train heading to Paris. Just like that, like it was no big deal,” said the elder Skarlatos, 65.
“I said, 'What?'”
Skarlatos said “let's go” when he spotted the gunman, and he was right behind Stone as he charged the attacker.
“All three of us started punching him while he was in the middle of us and I was able to grab him again and choke him unconscious while Alek was hitting him in the head with the pistol or rifle,” Stone said.
Stone's mother, Joyce Eskel, said she believed that Skarlatos saved her son's life.
“I really feel like they had a divine intervention and they were saved because the gun was at [Stone's] head and [the terror suspect] tried to shoot twice,” Eskel told Sacramento's ABC news station affiliate.
Skarlatos is also originally from Carmichael. Anthony Sadler
The third American was 23-year-old Anthony Sadler, a student at Sacramento State University.
He and a British business consultant, Chris Norman, helped subdue the man and keep him held down, after he was tackled.
“He leaves here a young man on an excursion and he comes back France's national hero. I'm still wrapping my head around that,” his father, Anthony Sadler Sr, said in an interview with NBC television.
For Sadler, “hiding or sitting back” was never going to accomplish anything.
“The gunman would have been successful if my friend Spencer had not gotten up,” he told reporters in Paris.
“I want that lesson to be learned. In times of terror like that to please do something. Don't just stand by and watch.” Chris Norman
“I don't feel like a hero,” said Norman, 62, who was the fourth man involved in restraining the gunman.
Norman is a Uganda-born British national who grew up in the south of France and had spent four years living in England, where he has family.
Norman is married with two children, one of whom is in the French navy, and two grandchildren.
The Daily Telegraph newspaper said he has lived in France for the past two decades and is based in the southern city of Nimes.
He said he helps African entrepreneurs find financing in Europe and was in the Netherlands looking for export credits for one of his clients.
Of his actions on the train, he said: “It was very rapid reasoning.
“My thought was, OK, I'm probably going to die anyway, so let's go. I'd rather die being active, trying to get him down, rather than simply sit in the corner and be shot.
“Once you start moving, you're not afraid any more.”
Speaking at the Elysee presidential palace on Monday, his brand new medal clipped onto his suit, Norman said it was “a little bit difficult to believe that it's actually happened.”
“I think that one way or another, we are going to be facing this kind of problem quite a few times in the future, and I would invite you all to think about 'what would I do in that situation'.
“Act if the opportunity presents itself. Obviously you don't want to throw yourself in a situation that is completely hopeless, but act if you can.” Unidentified Frenchman
A Frenchman who wishes to remain anonymous was the first person to discover the attacker in the train restroom — with a Kalashnikov slung over his shoulder, according to French Interior Minister Bernard Cazeneuve.
He “courageously tried to tackle him before the attacker fired several shots,” he added.