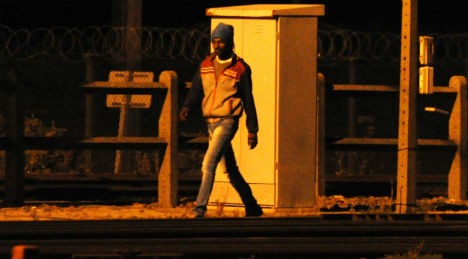 A migrant walks along the tracks heading towards the Channel Tunnel. Photo: AFP
Abdul Rahman Haroun, 40, appeared at Canterbury Crown Court in Kent, southeast England, via video link from a prison in the county.
He is charged under an 1861 law on malicious damage with causing an obstruction to an engine or carriage using the railway.
Speaking through an Arabic interpreter, he confirmed his name and said he was “not guilty” of committing the alleged offence.
The charge alleges that he entered, and traversed as a trespasser, the south-running Channel Tunnel, causing any engine or carriage using that
railway to be obstructed.
The railway tunnel is 31 miles (50 kilometres) long. Haroun is thought to have been found inside the tunnel near its exit in Kent on August 4th.
He was remanded in custody until his next court appearance, due on November 9th, ahead of an eventual trial scheduled to begin on January 4th.
SEE ALSO: Calais: A 'dying' city but not quite like Baghdad