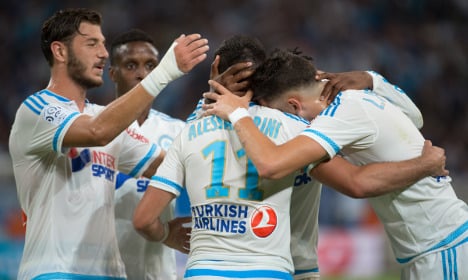 The Spanish coach, who signed a two-year deal on Wednesday to succeed Marcelo Bielsa, saw his side lead 1-0 at the break when Abdelaziz Barrada headed home in the 19th minute after Michy Batshuayi had headed against the bar.

Marseille tore into promoted Troyes in the second period with Lassana Diarra striking a thunderbolt from distance for 2-0 after 47 minutes.

Two became three soon after thanks to a wonderful individual goal from Belgian striker Batshuayi who made a surging run before powering past two defenders and finishing past 'keeper Denis Petric.

The influential Romain Alessandrini crossed from the right towards Lucas Ocampos and the Argentine — who signed permanently from Monaco in the summer after a loan spell last season — despatched a brilliant overhead kick past Petric.

Marseille, who finished fourth, were treating their new coach to a real spectacle and rounded off a terrific display with two late goals.

The impressive Batshuayi, who scored nine league goals in his debut season in France last year after arriving from Standard Liege, was brought down by Petric but Alessandrini was there to tap into the empty net for 5-0.

And Batshuayi got the second goal he deserved when he converted another Alessandrini cross with the ball appearing to come off his knee.

Marseille were without a point and had yet to score in the league prior to this match, but Michel — who had been out of work since being sacked by Greek champions Olympiakos in January — appears to have provided the spark that had been lacking.

“We dreamed that this would happen and the dream came true,” said Michel.

“I have to thank the players, they deserved this. I don't know how many fans were here (58,856) but it felt like there was a million.”

As for Troyes, this result handed the Ligue 2 champions a reality check as they suffered a first defeat of the season.

Saint Etienne picked up their first win of the new season thanks to a late Romain Hamouma winner at Lorient.

Christophe Galtier's side, who finished fifth last season, looked like they were going to be frustrated in Brittany but Hamouma curled home beautifully from inside the area with three minutes to go after receiving a pass from substitute Neal Maupay.

It's the visitors' third-straight win — all 1-0 — at the Stade du Moustoir and a fourth straight victory over the Breton club in all competitions.

Hamouma, who also netted in the 1-1 draw against Bordeaux last weekend, got the winner in Saint Etienne's 1-0 win on the same ground in the French League Cup last December and he tormented Lorient once again.

The hosts remain without a win this season having accumulated just two points from their opening three games.

Lille and Bordeaux remain without a win so far this campaign as they cancelled each other out at the Stade Pierre-Mauroy in a drab goalless draw.

Bordeaux were coming off the back of a Europa League play-off first-leg win against Kairat Almaty but have just two points from their three league matches — the same total as Lille.