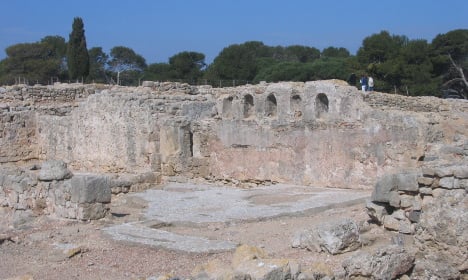 Officers spotted the couple inside a vehicle that was parked on a dirt road that leads to the back of the Empuries site in the north-eastern region of Catalonia early on Thursday, Catalan police said in a statement.

“Given where they were, the officers searched the vehicle and the two occupants. They found tools used in archaeological excavations,” the statement said.

Two metal detectors and two picks were among the items found by police inside the car.

“They also found several coins, brooches and other metal objects, covered in rust and earth, in the pair's clothes,” the statement said.

Police detained the two, a woman aged 47 and a man aged 31, and charged them with theft and crimes against historical heritage. Both are French nationals.

Police said they found 33 holes in the ground of the Empuries archeological site, which is located just outside of the town of L'Escala, that appeared to have been made recently.

The archeological site is home to the ruins of several Greek temples as well as remains of a Roman ampitheatre and two luxurious Roman villas in addition to a small museum.