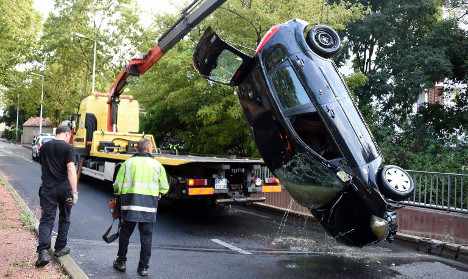 (Photo: Météo France)
The agency noted that there will be exceptionally strong winds – up to 100km/hr in some areas – and torrential rainfall.
Rough seas are expected to send huge waves crashing along the Atlantic coast in the west, with the agency noting that there are risks of flooding.
On the south-eastern side of France, strong winds and thunderstorms are predicted to continue. Météo France forecast that rainfall of up to 15cm could hit in a very short time.

Torrential rain and subsequent flooding took the lives of three French people over the weekend. An elderly couple died in Montpellier after their car washed away, and a Parisian on holiday in southern France died when his caravan toppled over in the wind.
Rail traffic was also delayed after a mudslide hit the tracks in the Languedoc-Roussillon region of southern France, but trains were running as normal again by Monday morning.
Monday's weather warnings are in place until 8pm, with more information to come in the agency's 4pm bulletin.