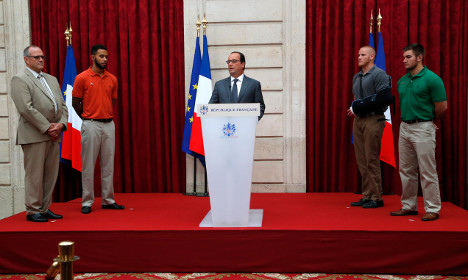 President Francois Hollande (C) delivers a speech next to (LtoR) British expat Chris Norman and US servicemen Anthony Sadler, Spencer Stone, and Alek Skarlatos. Photo: Michel Eul
President Francois Hollande bestowed France's highest honour on a group of Americans and a Briton on Monday saying the whole world “admires their courage and cool composure” in overpowering a Moroccan gunman on a crowded train.
Anti-terror investigators were questioning the alleged attacker, 25-year-old Ayoub El Khazzani, who boarded the high-speed train in Brussels bound for Paris on Friday armed with a Kalashnikov assault rifle, a Luger automatic pistol, ammunition and a box-cutter.
Witnesses said he opened fire, injuring a man before being wrestled to the floor and subdued by three young Americans — off-duty servicemen Alek Skarlatos and Spencer Stone and their student friend Anthony Sadler — and a Briton, 62-year-old business consultant Chris Norman.
Presenting them with the Legion d'Honneur at the Elysée presidential palace on Monday, Hollande said: “A terrorist decided to commit an attack. He had enough weapons and ammunition to carry out a real carnage, and that's what he would have done if you hadn't tackled him at a risk to your own lives.
“You have shown us that, faced with terror, we have the power to resist. You have given a message of courage, solidarity and hope,” Hollande said.
A French passenger who also tackled the gunman was also due to be honoured, but has chosen to stay anonymous.
Speaking as he left the Elysée, his medal pinned to his suit, Norman said it was “a little bit difficult to believe that it's actually happened”.
“I think that one way or another, we are going to be facing this kind of problem quite a few times in the future, and I would invite you all to think about 'what would I do in that situation'.
“Act if the opportunity presents itself. Obviously you don't want to throw yourself in a situation that is completely hopeless, but act if you can.” US ambassador to France Jane Hartley (C), off-duty US servicemen Alek Skarlatos (2nd R), Anthony Sadler (L) and Spencer Stone (2nd L) and Stone's mother Joyce Eskel. Photo: Kenzo Tribouillard/AFP
'Football and fishing'
Khazzani is said to have told investigators he is “dumbfounded” by accusations he was intending to carry out a terror attack, and insists he was only trying to rob passengers.
He said he merely stumbled upon a weapons stash in a park in Belgium and decided to use it to rob passengers, according to Sophie David, a lawyer who was temporarily assigned to his case when he was taken off the train in Arras, northern France.
Khazzani's father on Sunday described his son as a “good boy” who preferred “football and fishing” to politics.
“I have no idea what he was thinking and I have not spoken to him for over a year,” Mohamed El Khazzani told British newspaper The Daily Telegraph in Algeciras, Spain.
France's counter-terrorism police can hold Khazzani for up to 96 hours without charge. Intelligence services in Belgium, France, Germany and Spain have previously flagged him as an Islamic extremist.
One of the Americans who overpowered him said if Khazzani had known how to handle guns, he could have killed many people.
“He clearly had no firearms training whatsoever,” National Guardsman Skarlatos, 22, told reporters on Sunday.
“If he knew what he was doing or even got lucky and did the right thing, he would have been able to operate through all eight of the (ammunition) magazines and we probably wouldn't be here today along with a lot of other people.”
A Spanish counter-terrorism source said Khazzani had lived in Spain for seven years until 2014. He came to the attention of Spanish authorities for making hardline speeches defending jihad.
Spanish intelligence services say he went to France, from where he travelled to Syria, but the suspect has reportedly denied going to the conflict-ridden country where the Islamic State group controls swathes of territory.
Crossing into France
Khazzani is accused of emerging from a toilet cubicle on the high-speed train, brandishing the weapons, just after it crossed from Belgium into northern France.
The French passenger tried to disarm him but he got away and fired at least one shot, wounding a French-American traveller in his 50s.
Sadler, 23, dismissed suggestions that Khazzani was not trying to kill anyone.
“It doesn't take eight magazines (of bullets) to rob a train,” he told reporters on Sunday.
The Americans told the press conference that they had reservations in the first-class carriage where the attack took place, but could not initially find their seats.
They only moved to the carriage half an hour into the journey because the wireless Internet was poor and they were seeking a better connection.
Stone, who serves in the US Air Force, reached the gunman first and was slashed in the neck and on the eyebrow and almost had his thumb sliced off with a box-cutter.
“The gunman would have been successful if my friend Spencer had not gotten up,” said Sadler. “I want that lesson to be learned. In times of terror like that to please do something. Don't just stand by and watch.”