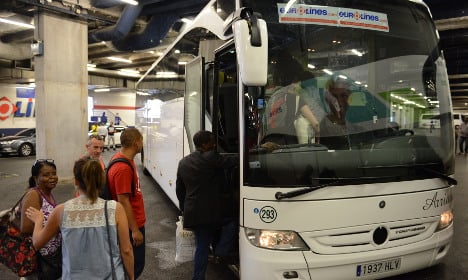 Travelers board a bus at the Gallieni international bus station and coach terminal in Bagnolet, east of Paris. Photo: Hugo Mathy/AFP

The opening up of the country’s coach sector is just one of the outcomes of the Macron Law, a new economic bill designed to modernize the French economy, speed up growth and deregulate many industries.

Several coach companies are already cashing in on the new rules, as shown in a new map (see below) featuring all the 250 new routes across France and into Germany, Amsterdam, Spain and Brussels, produced by the travel price comparison website GoEuro.

Prior to the change in law, bus services usually only covered routes for which there was no train connection, and are sometimes run by or for the SNCF.

The most popular coach journeys are between Paris and other major French and European cities including London, Amsterdam, Brussels, Barcelona, Lyon and Marseille.

There will also be services running through the south of France including the A9 road to Barcelona and the A7 (Highway of the Sun). Facilities on the coaches can vary but usually include comfortable seating with reclining seats, air conditioning, toilets, Wi-Fi, entertainment and disabled access.

According to the GoEuro, the deregulation of the market will see a ten to 70 percent drop in ticket prices over the next year as more operators cash in on the changes.

The move is expected to bring in over 5 million new coach passengers within the next year, resulting in an extra 22,000 jobs created.

Currently, around 14 million British people visit France each year, with around 6.9 million using the French rail service whilst there. It is hoped that a further 800,000 Brits will now be encouraged to use coach services in the years to come.

The brainchild of Economy Minister Emmanuel Macron, a former banker, the Macron Law was adopted by French parliament in July.

Controversially, it also includes a decree allowing shops in certain areas of Paris to stay open until midnight and on Sundays. For more information about coach travel in France see the GoEuro website.