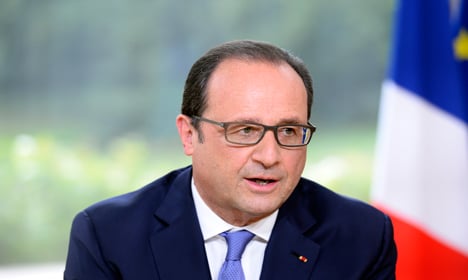 Hollande will meet passengers who intervened on the French train on Monday. Photo: Alain Jocard/AFP

The two presidents, speaking by phone late Saturday afternoon, “renewed their determination to work together to fight against violence and terrorism on all fronts,” it added.

Hollande will greet the train heroes at the Elysee Palace on Monday morning, a source close to his office told AFP.

Armed with a Kalashnikov assault rifle, an automatic pistol, nine cartridge clips and a box-cutter, the attacker opened fire on board a high-speed Thalys train just after it crossed from Belgium into northern France on Friday evening.

But the attack was quickly stopped when two off-duty US servicemen and their friend charged the gunman and restrained him. A British passenger also assisted in subduing the man.

One passenger received a gunshot wound in the attack, while one of the US servicemen was injured with a knife.

A 28-year-old French passenger had spotted the gunman as he exited a toilet cubicle and was the first to try to disarm him, but the suspect managed to slip away and fire several shots.

The gunman, identified as a 25-year-old Moroccan national Ayoub El Khazzani, was known to intelligence services over his links to radical Islam, French officials have said.

The Elysee source did not specify which passengers would be received by Hollande on Monday, saying only they were “American, British and French citizens”.