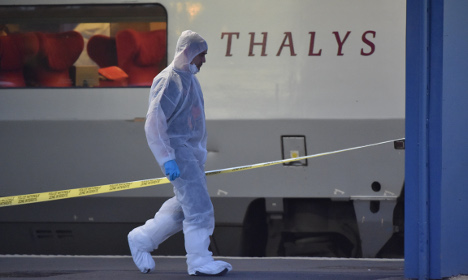 A policeman next to a SNCF Thalys train in Arras, northern France, on Friday after a foiled terror attack. Photo: AFP

The suspect is thought to be a 26-year-old Moroccan national. He was known to the French authorities after being flagged as a potential jihadist by Spanish intelligence services.

Spanish daily El País said he moved to France last year and had visited Syria. He is thought to have lived in Belgium in 2015.

Armed with a Kalashnikov assault rifle, an automatic pistol, nine cartridge clips and a box-cutter, the man opened fire on board the TGV train just after it crossed from Belgium into France on Friday evening.

But the attack was quickly stopped with the help of passengers, including a group of young Americans on holiday — two of them off-duty soldiers — who charged the gunman and overpowered him.

A French passenger was the first to tackle the gunman who opened fire on the train, French Interior Minister Bernard Cazeneuve said on Saturday.

The passenger “came across an individual with a Kalashnikov over his shoulder,” Cazeneuve told reporters. He “courageously tried to tackle him before the attacker fired several shots,” he added.

The gunman was then tackled by the two American off-duty serviceman, who “immobilised him on the floor and removed his weapon.

“My friends and I got down and then I said 'Let's get him',” Alek Skarlatos, a 22-year-old member of the National Guard in Oregon, told reporters.

“Spencer Stone, who is reportedly in the US Air Force, was the first to reach the gunman who slashed him in the neck and hand with a box-cutter,” Cazeneuve said.

Skarlatos, reached the alleged attacker next. “At that point I showed up and grabbed the gun from him and basically started beating him in the head until he fell unconscious,” he said. Skarlatos had recently returned from service in Afghanistan.

“As soon as we saw him, we all ran back there. It all happened really fast,” said Sadler.

“But we just carried on beating him up and immobilised him and that was it,” he added.

The Americans were also assisted by Chris Norman, a 62-year-old British consultant living in France.

Stone was taken to hospital along with another unnamed American passenger, who was hit in the shoulder with a bullet.

Mobile phone footage from inside the train and played on several TV stations shows the suspect, a skinny man wearing white trousers and no shirt, flattened on the floor of the train with his hands and feet tied behind his back.

A Kalashnikov is seen leaning against a seat and blood is visible on a window.

“I'm just a college student,” said Sadler. “I came to see my friends for my first trip to Europe and we stop a terrorist. It's kind of crazy.”

President Barack Obama praised the young men, saying “it is clear that their heroic actions may have prevented a far worse tragedy.”

“The bravery of Mr. Norman and the other passengers helped to prevent a terrible incident,” said a spokesman for UK Prime Minister David Cameron.

French President Francois Hollande invited the passengers who tackled and overpowered a gunman on a train between Amsterdam and Paris to visit the Elysee Palace, his office said on Saturday.

Hollande “spoke this morning on the phone with several American and French citizens who helped bring the attacker under control,” said a statement from his office, adding that the meeting would happen “in the coming days”.

The motives for the shooting were not immediately known, although French prosecutors said counter-terrorism investigators had taken over the probe.

France has been on high alert since Islamist gunmen went on the rampage in January, killing 17 people in Paris.

In June, a man beheaded his boss and tried to blow up a gas plant in southern France in what prosecutors say was an attack inspired by the Isis group.

He was arrested 10 minutes later when the train, with 554 passengers on board, stopped at Arras station in northern France, a railway spokesman said.

One of the passengers, who asked to be identified only as Damien, 35, said he had heard the gunman shooting but initially thought the sound came from a toy.

“The man stopped between two carriages, fired and it made a click-click-click sound, not at all like in the films,” he said, still clearly shocked.

Belgian prosecutors officially opened an anti-terrorism probe on Saturday, as the gunman had boarded the train in Belgium. Officials there decided on Saturday to step up security measures across its national railway network.

Starting this weekend, Belgian authorities said, patrols of the high-speed Thalys rail line as well as checks and patrols at international train stations would be intensified. Baggage checks were also set to be reinforced.