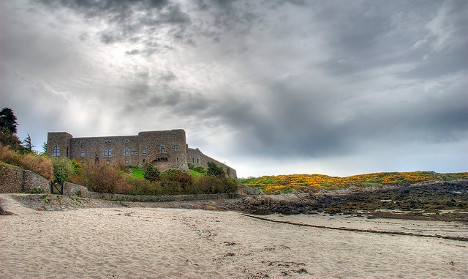 Police have said the deaths were likely accidental. Photo: Thomas/Flickr
The couple, both aged 31, were found on Thursday in a moat surrounding the Vauban fort in the Chausey archipelago, off France's north-western coast.
The man was found early on Thursday morning in a dried out part of the moat.
His partner was found later in the afternoon in water that was 1.5 metres deep. (The couple died off the north-west coast of France. Photo: GoogleMaps)
A local police officer was initially unable to give any clear indication of how the couple may have died, only saying that “the couple was found naked, with their belongings above”.
If indeed the couple fell – or jumped – from the fortress walls, they would have undertaken a ten-metre drop.
On Thursday evening, a police source told the Le Figaro newspaper that the death was accidental and likely occurred when the couple were “making love and something went wrong”.