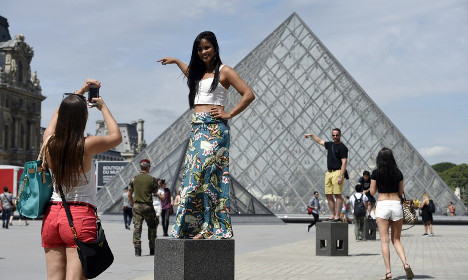 Tourists in front of the Louvre museum in Paris. Photo: AFP

“In 2015 we are going towards a new world record for tourism,” French Foreign Minister Laurent Fabius, who is also in charge of tourism, said at a press conference on Thursday.

“I hope that we will exceed 85 million.”

But the minister stressed that more should be done to encourage tourists to stay for longer periods of time.

“Tourists must stay longer [in France] and we must diversify the sites,” he said.

France has seen a surge in tourism this year with the first quarter, which is measured in the number of overnight stays, seeing an increase of two percent and 3.6 percent for foreign visitors. The number increased in the second quarter with hotel stays increasing by 2.3 percent compared with last year.

This has helped boost the sector’s revenue by around four percent.

According to Le Parisien, the surge in tourism is down to the good weather as well as the fall in the euro.

In Normandy, tourism officials estimate that tourism will be better this year than last year, despite the fact that 2014 already hit a record with the 70th anniversary of the D-Day landings.

The news comes after the French government announced it is to set up a massive investment fund to boost the tourism industry, in a bid to attract 100 million visitors a year.